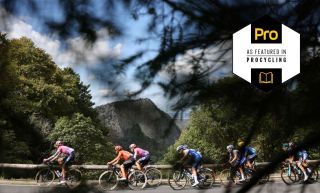 The break of the day on stage 13 of the Tour de France (Image credit: Getty Images Sport)

The Tour de France is a complicated, many-layered mix of goals, aims, politics, tactics and strategies. Everybody has an agenda. Everybody is trying to find an angle. Everybody is hustling. As with life, doing things would actually be quite straightforward, except that everybody else is also trying to do things at the same time.

It's why sprints are messy. If cycling were like the 100-metre sprint, the riders would all start at the same time and be confined to their own lane. Out in the chaotic world of a Tour sprint, riders are all over the place, mixed in with their lead outs and their rivals, with 180km in their legs already, starting their final effort anywhere between 300 and 100m to go.

At the start of a Tour stage, especially one as complicated as stage 13 to the Puy Mary, the agendas conflict even more. This is why the break took so long to form as the race left Clermont-Ferrand. As different teams fired different riders off the front, the delicate balance between their differing aims kept shifting. Everybody needed something out of the day.

Bora-Hansgrohe outmanoeuvred but optimistic at the Tour de France

You could roughly split the peloton by this point in the Tour into two groups of teams: those focussed on the general classification, and those who aren't. It's more complicated than this, of course, but for Jumbo-Visma, the team holding the yellow jersey, it was a rough rule of thumb by which to judge good escapees from bad ones: no threatening riders up the road, and preferably as few teammates of threatening riders as possible.

The GC teams at the start of stage 13 were:

As the attacks kept coming in the opening kilometres, Jumbo-Visma, as the team of race leader Primož Roglič, kept an eye on who was joining them. Nobody from the non-GC teams posed a threat. However, riders from GC teams were also trying to hide among them, and they needed to be chased down.

It was almost perfect in its composition for Jumbo-Visma. Deceuninck-QuickStep, CCC and Israel Start-Up Nation didn't have GC interest and though AG2R La Mondiale did with Romain Bardet, it was clear that Cosnefroy would be chasing mountain points rather than posing any big strategic threat (plus the Frenchman had been looking shaky in recent days). Deceuninck-QuickStep would have been happy to also take the bonus sprint points away from Peter Sagan, too.

Of course, though, it was too good to be true for Jumbo-Visma – too many other teams had their own plans.

More riders attacked from behind: Neilson Powless (EF Pro Cycling), Peter Sagan and Lennard Kämna (Bora-Hansgrohe), Imanol Erviti and Marc Soler (Movistar), Ion Izagirre (Astana), the list goes on. Sagan had an understandable agenda – green jersey points at the bonus sprint. But there were too many GC teams involved, and though at one point there were more than 20 riders trying to get away, Jumbo-Visma kept the pressure on at the head of the peloton.

By the top of the first-category Col de Ceyssat, 36km into the day, Jumbo-Visma were down to four riders on the front of the bunch with two more further back, and though they'd let several GC teams put riders in there, they relented soon afterwards. The break was made.

In the end, 17 riders managed to get away. Von Bismarck described politics as the art of the possible – Jumbo might have preferred not to have riders from UAE Team Emirates and Ineos Grenadiers in the group, given that Tadej Pogačar and Egan Bernal looked in the morning like Primož Roglič's biggest threats, but there was only so much effort they could throw into preventing it. Controlling the Tour de France is also the art of what is possible.

Jumbo-Visma gave the group 10 minutes. This may have been a strategic choice on their part – if Ineos Grenadiers and UAE Team Emirates were going to have riders up the road, it was as well for them to be so far up the road that they wouldn't be able to help their team leaders. (This may explain, along with the muscle memory of eight years of crushing the peloton with a mountain train, why Ineos went to the front of the bunch in the latter part of the stage and cut the group's lead by several minutes.)

The group itself worked well together. But the conflicting aims of its different parts were inevitably going to rub up against each other. The important fact of any break is that teams with more than one rider have the upper hand. In this case, these were EF Pro Cycling with Powless, Carthy and Martínez; Deceuninck-QuickStep with Cavagna and Alaphilippe; and Bora-Hansgrohe with Schachmann and Kämna.

However, the other salient point of this stage was that it had a very hard uphill finish. Sometimes politics, agendas, tactics and strategy bump up against the inconvenient facts of the real world, and Alaphilippe and Cavagna immediately fell out of the picture when they could no longer follow. You can be as clever as you like in a bike race, but if you can't turn the pedals fast enough, you still lose.

The really effective work was done by EF Pro Cycling and Bora-Hansgrohe, who not only had the numbers, but also some of the strongest riders. After all the work by all the different teams in the race to get to this point, it had come down to these two teams. The advantage swung like a pendulum.

Powless drifted off the front on the a descent 40km out. Advantage EF. He was followed by Max Schachmann. Deuce. Schachmann rode away from the American on the penultimate climb of the Néronne. Advantage Bora-Hansgrohe.

With Powless faltering, Martínez set off in pursuit, Kämna in his wheel. Advantage EF, because Martínez looked the strongest. Or perhaps it was advantage Bora-Hansgrohe, because Schachmann was holding out alone, and Kämna wasn't contributing.

Martínez was outnumbered, but by the final climb, he could be confident that if he could close Schachmann down as he did, it was because he was stronger. And when Kämna attacked Martínez but came nowhere near dropping him, it was clear what the result would be.

A quick note on Martínez's stage management: he'd gone away from the peloton in tandem with Hugh Carthy when the stage was at its most complicated early on, and the pair put a lot into getting to the front of the race. And then again, when Schachmann was ahead in the final stages, he'd fully committed to catching him, which also took a lot of work.

At the end, he'd not allowed the agendas and aims of other riders to get in the way of his ultimate goal.