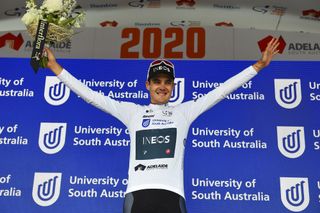 Pavel Sivakov in the best young rider's jersey at the Tour Down Under (Image credit: Bettini Photo)

Pavel Sivakov started the 2020 season in Australia, showing excellent form and the same natural determination that has made him one of the most promising Grand Tour riders of his generation. After finishing ninth at the 2019 Giro d'Italia, Sivakov is focused on securing a place in the Team Ineos squad for this year's Tour de France.

In Australia, Sivakov won the best young rider's jersey at the Tour Down Under and was second at the Cadel Evans Great Ocean Road after launching the attack that decided the race, beaten by Dries Devenyns of Deceuninck-QuickStep.

Sivakov is still only 22 but his confidence comes through when he races and talks about his ambitions. He believes he can earn a place in Team Ineos' hierarchy for the Tour de France. He may have to slot in behind Egan Bernal, Geraint Thomas and Chris Froome in the leadership ranks but he appears on a fast track to be a future contender for the yellow jersey.

"My main goal will be to get the selection for the Tour this year. That would be my objective. Of course I'll try to perform in races leading up to it too," Sivakov said during an interview in Australia.

"On our team, almost all of the guys could be a leader on another team, that’s why it’s so hard for us to get a place in the Tour squad. That's why it's such a big thing for me. This year we have some winners that will go back, too, and that makes it even harder and there are less spots available. But if I work hard I think I can make it, why not?"

Sivakov was born in Italy, grew up in France, but is Russian because both his Russian parents raced as professionals in Europe before settling in the Haute Garonne region of France at the foot of the Pyrenees. Sivakov has a French passport but there is no chance of him becoming France's next Tour de France winner. He has already raced for Russia and is ready to race under a neutral title at the 2020 Tokyo Olympics if WADA and the IOC ban Russia after the discovery of systematic doping in Russia in recent years.

Sivakov showed his Grand Tour potential in 2017 when he won the Ronde de l'Isard, the under 23 Giro d'Italia and the mountainous Giro Ciclistico della Valle d'Aosta. He was expected to step-up from the BMC development team to the WorldTour team but opted to sign with Team Sky instead, due to the uncertainty of the long-term future of the BMC team.

That upset BMC manager Jim Ochowicz but Sivakov became one of the new generation of riders at the British super team, along with Egan Bernal, Tao Geoghegan Hart and later Ivan Sosa. As Froome and Thomas age, Sivakov, like Bernal, is expected to fill their roles as a Tour de France winner during the next decade.

Sivakov appears to have the potential. His 2018 was slowed by injury but he finished 14th at the Tour de Suisse and rode two weeks of the Vuelta a Espana before being pulled out by the team. In 2019 he made a massive step up. He beat Geoghegan Hart and Vincenzo Nibali to win the Tour of the Alps, showed his consistency in the final week of the Giro d'Italia to finish ninth and then won the Tour de Pologne.

Sivakov would rather have a domestique role at Team Ineos for the Tour de France than return to the Giro d'Italia as Richard Carapaz' understudy.

"I want to learn about the Tour and how to prepare for it. I also want to keep progressing. I don't mind working for someone if that guy's stronger than me. I understand that," he says, knowing he will celebrate his 23rd birthday on July 11, stage 14 of this year's Grand Boucle.

"I’d rather be there, to see how things work, to progress and help the other guys win. You still learn so much doing that. I'm still young, I don’t want to rush things. I am happy with how things are at this point of my career."

Part of Team Ineos' next generation

Sivakov seems to thrive on the internal rivalry at Team Ineos; perhaps confident of his own ability and sensing he is destined for greatness. He locked horns with Geoghegan Hart at the Tour of the Alps but then the British rider helped him at the Tour de Pologne. They are both friends and rivals, learning from each other and pushing each other.

Sivakov and Bernal were rivals back at the 2017 Tour de L'Avenir and will no doubt become rivals at the Tour de France in years to come but Sivakov does not want to look that far down the road, showing his respect for the Colombian, despite their similar age.

"Maybe but I don’t think about it. He’s the leader of the team and the Tour de France winner," Sivakov says. "I don’t think about that, not in the short-term. I'm focused on this Tour, this year, this season, then we'll see how things evolve."

"Me and Egan did one race against each other, the 2017 Tour de L'Avenir which he won. I wasn’t my best there, I'd had a good season but my form was fading. I won a stage but I wasn’t 100 per cent."

Sivakov is friendly and relaxed but his ambitious shines through. He is not afraid to suffer and to fight to secure a place in the Team Ineos squad for the 2020 Tour de France and then emerge as a future Grand Tour contender.

"I know I will have to be there with the best guys on the climbs to prove myself in order to earn my place for the Tour. It’s a bit more pressure, but I want to get the best out of myself. And a bit of pressure is good if you want to progress. I know I can do even better than last year," he says.

"The atmosphere is good at Team Ineos. There’s always a balance between young guys and experienced guys, the team always makes sure of that.

"The young guys are a strong group; we're trying to improve and be better than the other guy and that keeps each other motivated. In my opinion, you need to have a bit of competition within the team if you have strong guys.

"If you're on a smaller team and you are the only leader, it’s easier to relax. Here, it's no matter who you are, you have to work and prove yourself. If you want to hit the top level it’s not going to be easy, so it's good to have healthy rivalry in the team."