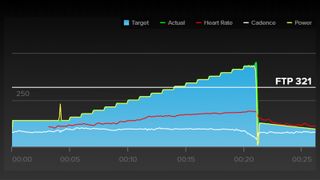 Cycling has become an appreciably data-rich sport and, with a major focus on indoor cycling of late, one of the concepts that have risen to the fore is Functional Threshold Power – or FTP.

The most accurate way of measuring your FTP is by way of a performance test as it provides an individual with information on the characteristics associated with cycling performance. While the gold standard of performance testing is VO2max and lactate tests performed in a laboratory setting, you can also accurately determine it in the comfort of your own home using most of the currently available indoor cycling apps and a smart turbo trainer or power meter.

The indoor revolution: How training inside went from being universally hated to one of the fastest growing sectors

The most important aspect of any test is its validity and reliability, and ensuring that the results achieved are repeatable.

Why you should conduct a performance test

Performance tests are conducted for a range of reasons. However, the most applicable reasons for cyclists are to establish training zone prescription and performance monitoring. And while these tests have been performed in the lab or outdoors in the past, the current global lockdown situation has forced us to explore the ramp test and other third-party FTP test protocols.

This is arguably the hottest term in cycling, with thousands of cyclists signing up to online cycling platforms such as Zwift, TrainerRoad, Rouvy and The Sufferfest, which utilise your FTP value to establish your in-game racing category or workout difficulty.

Functional threshold power is defined as the highest power output a cyclist can maintain in a quasi-steady state for approximately 60 minutes (FTP60).

FTP was conceptualised in this way as it resembles physiological markers of performance such as the maximal lactate steady state (MLSS) and second lactate turn-point (LT2). Exercises sustained at intensities higher than these physiological markers do not reach steady-state and lead to exhaustion.

As it is rather painful to perform a 60-minute sustained effort as a test, Hunter Allen and Dr Andrew Coggan suggested that FTP60 could be determined as 95 per cent of the mean power output in a 20-minute TT (FTP20). This would assist in reducing the effort time and improve the practicality for regular assessments.

A second method of determining FTP60 was suggested as performing 2x 8-minute time trials and utilising 90 per cent of the mean power output. Research has shown that FTP60 and FTP20 are more closely related to LT2, and should, therefore, be the preferred method of testing.

There is a large debate raging whether FTP is a thoroughly valid concept, due to large limits of agreement between most variables, suggesting a high level of interindividual variability in the relationship between FTP20 vs. FTP60. These measures should therefore not be used interchangeably unless their relationship is tested on an individual basis. It has been suggested that FTP20 is used for training intensity prescription and regular monitoring, as the 20-minute time-trial performance is reliable, and is sensitive to training adaptations and cycling ability.

One of the major concerns of 20-minute FTP testing is the pacing strategy of the test. Starting too conservatively or too aggressively will not be a true reflection of your ability. While this can be corrected with a few familiarisation trials, it's hard to get this correct every time, affecting the reliability of the test.

The ramp test, or graded exercise tests (GXT), are most commonly performed in a laboratory setting to determine VO2max. These can, however, be used to determine training-zone prescription and FTP without the use of VO2max equipment.

It is the chosen method of testing at the beginning of any TrainerRoad workout plan as it removes pacing and the opportunity for poor execution.

"Pacing is a really hard thing to nail. Even experienced riders can struggle," writes Jonathan Lee, Communications Director at TrainerRoad. "The Ramp Test eliminates pacing from the equation altogether. Resistance simply steps up every minute and you ride until you can't maintain target power any longer."

The major benefit of the ramp test over a traditional 20-minute FTP test is the reliability of the test. The testing can be done on a regular basis utilising the exact same protocol and equipment, which increases the value of the data gained from a performance-monitoring perspective.

The ramp test estimates FTP by taking the average power of your last minute of the test and multipling it by a percentage (Zwift and TrainerRoad use roughly 75 per cent). This is done as an estimation of your LT2, as its importance was discussed earlier. Your LT as a percentage of your PPO (Peak Power Output) is an important determinant of endurance performance and cyclists should aim to have an LT at ~80 per cent of their PPO.

As a coach, I recommend utilising the ramp test for FTP testing, training-zone prescription and performance monitoring. The information gathered from the ramp test is more reliable than that of the FTP20, where a poorly paced effort can make a huge difference to your results.