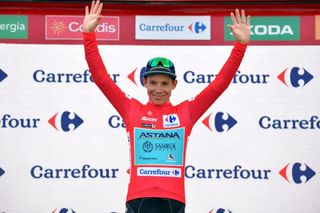 Four days after he gained the race lead of the Vuelta a España on its opening stage, Miguel Ángel López (Astana) is back in red again.

The Colombian climber could not win on the summit finish at the observatory atop the Alto de Javalambre, but he revealed himself to be, for now at least, the strongest of the GC climbers.

López powered up the final four kilometres after he crowned a blistering attack by Alejandro Valverde (Movistar) with an equally savage move of his own.

Riding solo and without any sign of weakening, the Colombian climber crossed the line with a 12-second advantage over Valverde and Primož Roglič (Jumbo-Visma), the latter the rider he – logically – fears most, given the stage 10 time trial in Pau.

"Today was important because the time trial is getting close," López told reporters afterwards. "I knew that the start of the climb wasn't so hard, so I decided to wait until there were only the leaders left, and finally we got to a point when only Roglič and Valverde remained.

"I decided to see how they would respond, I only got a few seconds, but it's better than nothing."

There's also the not-so-minor matter of re-taking the red jersey. López now leads overall by 14 seconds on Roglič, with Nairo Quintana (Movistar), who lost nearly a minute on López and dropped from second to third, at 23 seconds.

The Astana leader played down the importance of having lost time on stage 2, when Quintana and Roglič, as well as Rigoberto Urán (Team EF), Nicolas Roche (Sunweb) and Fabio Aru (UAE Team Emirates) staged a late breakaway.

"It was a little bit of an error, but there is a long way in this Vuelta to go and in the long-term it might have become an advantage," he argued, the implication being Astana could cede the responsibility of controlling the race for a few days to Sunweb.

López was cagey about whether he would go on the attack again as soon as possible, although Friday's closing ascent of Mas de la Costa (4.1km at an average of 12.3 per cent) seems made for a lightweight climber for him. And then, of course, there's the major mountain stage 9 through Andorra to Cortals d'Encamp.

"We've living through each day as we can, and today went well, tomorrow I'm hoping to have a great day," he argued. "I did think about going for the stage win, but nobody was riding too hard behind to pull them back and it was complicated because so many riders were still up there on GC.

"I didn't imagine that the break could stick today, but from hereon the strategies could change again. We will see what we can do."