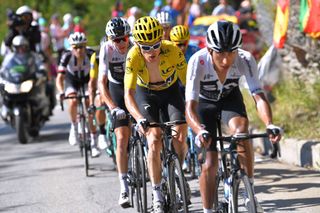 Having multiple leaders in races always seems like a good idea on paper. If one of the designated captains has an off-day, then there's still the other one - or, in this case, the other two - left in the game.

If you’re playing a game based purely on numbers, then it's logical to keep your options open, and it’s a strategy that can work well at times. However, there are also considerable limitations and there is historical evidence to back that up.

One-day races and the Classics feel like the ideal events for multiple leaders, and immediately you think of how Patrick Lefevere's Deceuninck-QuickStep team sets itself up to win with whoever is the strongest - or, in many cases, the smartest.

When I was at Panasonic, I learned the mentality behind the Dutch and Belgian approach to one-day racing. The team that takes the initiative and places as many riders in the front group almost always comes out on top. There are some rare exceptions, of course, but if a team can stack the front group with options during the finale of a big one-day race then they inevitably have the strongest hand to play. They can attack several times, chase if they have to, or, almost always, wait for the sprint.

Also, with one-day races it's easier to spread the chances because there are naturally more of them on the calendar. As we've seen with QuickStep, you can keep a core of potential leaders and create a strong bond between them and between the riders who are there as the domestiques.

It becomes trickier to do that when you try to apply that blueprint to stage races.

Anything up to a week long and the strategy can survive but once you go past that and into Paris-Nice and Dauphiné territory, the idea of multiple leaders starts to unravel due to rarity of the occasion.

History tells us it's impossible to do when it's a Grand Tour. It never ends well for team harmony when two of their riders are in direct competition for the victory of a three-week race.

I've seen it up close and personal the problems that Hinault versus LeMond caused and the nastiness of Roche fighting with Visentini. Look at when Lance Armstrong made his comeback and Contador stood in his way in 2009. Someone is always going to be left disappointed with the outcome, and that's when there are only two egos and ambitions to protect.

The challenge of managing three leaders looks like a nightmare waiting to happen, especially when the team sizes are reduced like they are nowadays. The resentment can easily begin even before the numbers are pinned on and hostilities commence. At Tour de France-winning level, the politics and mind games start months before and don't end when the line is crossed in Paris.

If you want to be considered a serious contender for that top step on the Champs Elysées, you have to talk, act and control your rivals at every available opportunity.

Why do you think Chris Froome was mentioned to be considering a mid-term move to another team? It's because in the mind of a Grand Tour winner he's already had to reign in his ambitions when Bradley Wiggins won in 2012 and, with the prospect of joining the five-time Tour de France winners' club, he's not going to give up his chance of making history.

All the while, Egan Bernal has said he's riding to win, and Geraint Thomas has seen what was missing from his form last year and will be working on his condition to be the rider that won in 2018.

That's three out of eight riders committed to their own cause. The five remaining domestiques can't be everywhere and doing everything for all of them. Just by the differences of how each of the Ineos leaders races, there'll be times when the expected support won't be there and that's under normal race conditions.

Imagine the scandal if circumstances see one of them left to fend for themselves in a side-wind or puncture scenario. Dave Brailsford will need all of his legendary management and psychology skills to keep control of his team in the run-up to, and during the Tour de France.

Over at Jumbo-Visma, it's a slightly easier situation but only because they don't have a previous Tour de France winner to make demands.

However, they have Tom Dumoulin and Primoz Roglic, who have won a Giro and Vuelta respectively, and Steven Kruiswijk, who stood on the podium of the Tour last year, so it's not exactly a shabby set of riders to manage.

Realistically, Dumoulin has the most pressure on him as he's the big signing and he's on a Dutch team. Back home, everyone is watching, waiting, and expecting.

Roglic is probably the one who could sneak off and take some advantage over his co-leaders and, seeing how he can both time trial and climb, it would be a hard task to take the team leader position back off him. Kruiswijk may not seem to have the same spectacular talent as his colleagues but he's consistent, in much the same way as Geraint Thomas is, and his bad days are never so bad that he's out of the equation altogether.

In the pre-Tour speculation, Team Ineos look to have the better domestiques to support their leaders than Jumbo-Visma, but it only takes a crash or two for any of the squads to change the dynamics of what will be a fascinating rivalry.

For each of the teams, it may well come down to which of their leaders seizes the initiative first. Dumoulin and Froome haven't really faced that type of in-house scenario before, though the latter's 2018 Giro d'Italia attack shows that he can throw caution to the wind. Both Thomas and Bernal won their Tours by seeing the opportunity and taking it. Faced with the more cautious types of rider on the Dutch squad, that may well be the answer.

And while we can speculate on which of the multi-leader teams might do this or that, in the background all those other teams with just one designated leader will be planning on riding their own race.

Pinot, Alaphilippe et al, will be watching with a very close eye on how the race plays out when it comes down to decision time between the favourites.