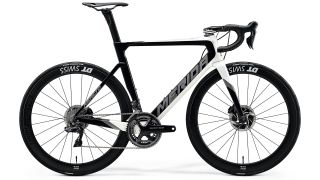 Merida might be one of the newer brands to the World Tour, but the brand has been making bicycles since 1972, initially as an Original Equipment Manufacturer. It is in fact, one of the largest bicycle manufacturers in the world.

Merida Founder Ike Tseng established the company with the goal of improving the reputation and quality of bikes made in Taiwan. To this day, the company still makes all of its bikes by hand at their own factory in Taiwan. In 1988, the company created its own brand of bicycles, Merida, and has since established a central research and development team in Germany.

Merida is so confident in the quality of their manufacturing methods and quality control standards, that they offer a lifetime warranty on every frame manufactured since 2011, to the original owner. So you can be confident that, should any issues arise, Merida will stand behind their product.

Continue reading for details on all of Merida’s road, TT/Tri, cyclocross and gravel bikes.

Stiff, lightweight and versatile. The Merida Scultura is a brilliant all-round race bike

The Scultura is Merida’s all-round racing platform. Designed to be stiff, lightweight, comfortable and with handling fit for the Grand Tours.

Right on trend, the Scultura uses subtly aero profiled tube shapes that help to reduce drag, while still achieving a lightweight and stiff frame. It is available in either rim or disc brake builds at all price points, and uses Shimano gearing across the range.

Both rim- and disc-brake models at this level use Merida’s CF4 geometry, which is designed for racers, with longer reach and lower stack heights across the sizing range. These frames also use a slimmer 1 1/8” to 1 1/4” tapered head tube to reduce frontal area and further increase the frame’s aerodynamic efficiency.

In the mid-range, the Scultura 4000 to the Scultura 7000-E, use Merida’s CF2 framesets. The geometry is more relaxed, with a shorter reach and higher stack heights across the size range, and the carbon fibre blend is of a slightly lower stiffness to weight ratio, that also means it’s less expensive to produce. These models share the aero profiled tubes of the CF4 framesets, but have a slightly larger 1 1/8” to 1 1/12” tapered head tube.

Whether you're looking for a lightweight race bike or something a little more relaxed, our carbon road bikes guide will provide the necessary information for you to confidently choose your next carbon road bike.

At the lower end, the Scultura range has five aluminium models (the Scultura 100 - Scultura 500), offering similar performance and geometry to its CF2 carbon siblings, but at more budget friendly price points. Utilising a lightweight 6066 triple butted aluminium frame with hydroformed tube shapes, a tapered head tube, a full carbon fork, smooth welds and internal cable routing, these Scultura models are no slouches when it comes to putting down the power.

Disc brake models can fit up to a 28mm tyre, but rim brake versions are limited to 25mm tyres (comparitively narrow in today's market), so this is perhaps something we’ll see Merida update in future models. Carbon disc brake models include Merida’s Disc Coolers; a forged aluminium part, placed under the front and rear brake calipers, that draws heat away through CNC-milled cooling fins, for better braking performance.

In addition to the twelve unisex builds, Merida also offers three women’s specific builds - the Scultura 100-Juliet, 400-Juliet and 4000-Juliet. The Scultura Juliet models come in smaller sizes, with Merida’s women’s specific geometry. They also have alternative paint schemes, and use women’s specific saddles and other components, like Shimano’s Dual Control levers for small hands, and are available in both rim and disc brake builds.

Fast and responsive, the Merida Reacto is a no-compromise race bike for flat and rolling courses

An aero road bike is all the rage in the World Tour these days, so it’s no surprise to find Merida makes one. The Reacto is designed with all out speed in mind, but is still light for a purely aero-focused frame - claimed frame weights are only around 200g heavier than the Scultura.

The Reacto series is made up of 12 different models, with Shimano groupsets and rim or disc brake options across all of the carbon models (the Reacto 400 and Reacto 300 have an aluminium frame and are available with Shimano rim brake groupsets only).

The top of the range models use Merida’s highest quality CF4 carbon framesets, for the highest stiffness to weight ratio possible, and have aggressive CF4 geometry, with longer reach and lower stack heights across the size range, just like the Scultura. Below that, the Merida specs its CF2 carbon frames and geometry.

The Vision Metron 6D carbon handlebar system is also integrated into the design of the CF4 frame, reducing drag and cleaning up the front end. Cables are routed semi-internally, meaning there is some cabling exposed to the wind, but this could well be a compromise worth making for the increased simplicity such routing provides over fully internal cable systems - especially if you don’t have a professional mechanic to hand at all times.

We've ridden a range of aero road bikes, so feel we're in a position to offer helpful buying advice if you're looking for an aero road bike of your own. Check out our roundup of the best aero bikes available this year.

Across the range, the frame is constructed using NACA Fastback profiled tubes, which means the tube shapes are truncated aerofoils - balanced to maximise aerodynamic performance, whilst still maintaining rigidity and lowering weight. The CF4 carbon frames also have a 1 1/8” to 1 1/4” tapered head tube that helps slim down the frames frontal area, decreasing drag levels even further. The CF2 framesets have a slightly larger 1 1/8” to 1 1/12” tapered head tube.

Dropped seat stays offer a further aerodynamic improvement, but also increase comfort levels by allowing the seat tube and seat post to flex more under load. The S-Flex carbon seat post is shaped with an aero profile, and a cut-out filled in with silicone. This clever design enables it to be as comfortable as a traditional carbon seat post, without compromising on aerodynamics.

The aluminium Reacto 300 and 400 stand out in the market as value aero racing bikes. Offering similar NACA Fastback tube profiles, dropped seat stays and a 1 1/8” to 1 1/12” tapered head tube for £1000 less than the cheapest carbon model (the Reacto 4000). It does give up a little in terms of weight, but if you live in a flat part of the world and you want to go fast for less cash, this could be just the ticket.

Using NACA fastback, truncated aerofoil tubing and an aggressive geometry, the Merida Warp carbon frameset is optimised for the solo rider wanting to go as fast as possible against the clock.

The Warp frame has an aggressive geometry and a flip flop seat post, offering seat tube angles of 76 or 80 degrees, making it easy to get over the bottom bracket and open up your hip angle, for an aggressive but powerful (and UCI rule-breaking) fit.

Gear cables are routed internally, through the top of the frame, just behind the stem. The top tube rises to fill in the low-pressure area generated by the stem, decreasing the aerodynamic drag of the frameset.

Furthermore, Shimano 105 direct mount brakes, on the front of the fork and underneath the bottom bracket, make for powerful, reliable brakes, and are also notably easier to service than the integrated brakes found on most time trial/triathlon bikes.

The Merida Warp 5000 currently stands as the only time trial/triathlon-specific bike in Merida’s range. The Time Warp TT, as used by team Bahrain-Merida and first spotted at the 2018 Tour de France, includes a completely integrated, one-piece carbon cockpit, fully hidden cables, a frameset that is 400g lighter than its predecessor, and an integrated Di2 junction box (located just above the bottom bracket for easy access). Unfortunately, this version of the Warp is not yet publicly available, but Merida says that we should see it hitting shelves at some point in 2020.

With a geometry that mixes the best of road and mountain bikes, the Merida Silex is designed to be at home on gravel and adventure rides across mixed terrain.

At a glance, you’d be forgiven for thinking that the Silex looks quite a lot like a mountain bike with drop bars, but that’s actually not too far from the truth. A compact CF2 carbon (Silex 6000) or triple butted 6066 aluminium (Silex 600-200) frame, with a long top tube and tall head tube, combined with a short stem offers nimble, precise handling on all surfaces, and puts the drops in an accessible position.

To further add to its adventure credentials, the Silex can easily accommodate a wide range of luggage and accessory options, including frame bags and large saddle bags, meaning it really is a truly go-anywhere bike.

The Silex is specced with 700x35C semi-slick Maxis Razzo tubeless tyres as standard, but can easily accommodate up to a 42C road tyre on 700C wheels. The carbon Silex 6000 frame can even accommodate 50mm wide tyres on 650B wheels, opening up its off-road potential even further.

The Silex 6000 also benefits from Merida’s Disc Cooler’s - a forged aluminium part, placed under the front and rear brake calipers, that draws heat away through CNC-milled cooling fins, for better braking performance, especially under load where high temperatures are more easily generated.

Developed primarily for cyclocross racing, the Mission CX offers a versatile platform suitable for multiple types of riding, as showcased by Vincenzo Nibali.

Available exclusively with hydraulic disc brakes, for superior braking in poor conditions, and SRAM 1X11 gearing, the Mission CX is set up to be fast on technical cross courses. Redesigned geometry brings lots of tyre clearance and reduces toe overlap, and short head tubes across the size range means you can get into a racy position with ease.

Smart touches like the ability to run full-length mudguards, also give it enough versatility to become a go-anywhere winter training bike or a fast commuter.

Both share the same 6066 aluminium frame, with triple butted and hydroformed tubing, internal cable, full-length mudguard mounts and cable accepted disc brakes. Alloy forks across the range, unfortunately, add weight, and aren’t as comfortable as carbon forks, but they do bring the cost down significantly.

The Cyclo Cross 100 is set up with SRAM Apex 1x11 - dedicated cross racing gearing - and comes with a conspicuously loud paint job for an entry-level bike. Kudos to Merida for not being boring here.

The Cyclo Cross 300 is only £25 more than the Cyclo Cross 100 and represents something of a differential in Merida’s range. Set up with Shimano Tiagra 2x10 gearing, a 50/34 compact FSA Crankset and an 11-32 cassette, the Cyclo Cross 300 is better suited to road and mixed terrain riding. With the addition of mudguards, it would make an ideal budget winter training bike or bombproof commuter.

US Availability: Currently, Merida bicycles are not available in the USA.