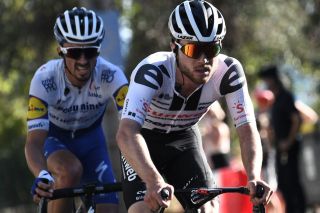 Speaking at the finish line on the Promenade des Anglais, Adam Yates wasn’t entirely sure of the name of the rider in the Sunweb kit, but he could surely vouch for Marc Hirschi’s quality after witnessing the Tour de France debutant’s assured cameo on the Col des Quatre Chemins on stage 2.

The Swiss youngster placed second behind Julian Alaphilippe (Deceuninck-QuickStep) and ahead of Yates in the three-up sprint at the finish in Nice, where he threatened to pip the Frenchman to both the stage honours and the maillot jaune, but instead had to settle for the white jersey of best young rider.

The whole peloton and a global television audience knew that Alaphilippe was going to attack on the day’s final climb but, as if to make sure, he signposted his intentions more explicitly by delegating Deceuninck-QuickStep teammate Bob Jungels to set the tempo on the lower slopes.

Yet when Alaphilippe bounded clear with a little over 13km remaining, and with his every sinew straining, only one rider dared to try to follow. At first glance, Hirschi’s attempt to bridge across looked more of a vague aspiration than a concrete ambition, but, metre by metre, he clawed his way up to Alaphilippe’s rear wheel and then stuck doggedly with him all the way to the summit.

"Everybody expected Alaphilippe would attack. I was on the way to move up when he attacked, so I wasn’t perfectly on the wheel, but I knew if I could get to his wheel, you could still take a bit of slipstream on this climb and it got flatter near the top," Hirschi said afterwards. "I almost blew up, but somehow I made it over the top."

Come the top, Hirschi and Alaphilippe had been joined by Yates, and the trio had a 14-second buffer on a reduced peloton as they began the descent back into Nice. Despite facing a block headwind, they still had 20 seconds in hand on their pursuers by the time they reached the flamme rouge -- a lead they came perilously close to frittering away as they eyed one another before the sprint. Hirschi based his effort on Alaphilippe, but he couldn’t quite come past him at the line.

“I focused on the stage win and not the GC or anything," Hirschi said. "In the final, I took the wheel of Alaphilippe, but I was again a little bit late. I tried to go around him, but I was a bit too late. I’m disappointed because I could have taken yellow, but I’m still super happy with the white jersey."

'The Mbappé of cycling'

Hirschi may have been unfamiliar to some of his opponents in the hinterland of Nice on Sunday afternoon, but he entered the professional ranks at the start of 2019 armed with a notable calling card, having become the first man to win the under-23 road race at the European and World Championships in the same season. That feat was perhaps overshadowed by Remco Evenepoel’s startling displays in the junior editions of those races, but Sunweb were already long convinced of Hirschi’s quality. They had signed him to a professional contract before he claimed either of his titles.

Hirschi first took up bike racing as an 11-year-old, inspired both by his father’s passion for the sport at home and his fellow Bern resident Fabian Cancellara’s success on the international stage.

"Fabian Cancellara also influenced me, for sure, because I live really close to him," Hirschi told Cyclingnews last year. "I started cycling in his peak years and I looked up to him."

His childhood hero later became his agent, and in an interview with Schweizer Illustrierte in the spring, Cancellara compared his new client to a youthful star from the world of football.

"He has the potential of a Kylian Mbappé," Cancellara said admiringly. "Marc has the skills it takes. But talent is also expressed in a broad interest and thirst for knowledge, and you can clearly feel that with Marc."

Like the Paris-Saint-Germain striker, Hirschi’s talent seems matched by a self-effacing work-rate. Although many aspiring professionals in the under-23 ranks devote their time wholly to cycling, Hirschi did not become a full-time rider until weeks before he won the European title. On leaving school, he spent four years combining his budding racing career with an apprenticeship arranged in conjunction with the Sports Academy Solothurn.

"I did an apprenticeship in an office for four years, in basic office work," Hirschi explained. "That’s really good, because if I have a crash or something, I could go directly into work."

Hirschi began his life on wheels as a mountain biker, but road, cyclo-cross and track racing were added to his repertoire as a teenager. As a junior, he won Madison gold at the World Championships, but he gave up racing on the track the following year when he joined the BMC development team.

"In the juniors in Switzerland, everybody does track, too, but I decided to focus on the road afterwards because I think it’s too difficult to do both at under-23 level," he said. "I had to make a choice, and my choice was road cycling."

His teammates at BMC included fellow Tour debutant Pavel Sivakov (now Ineos) and Jasper Philipsen (now UAE Team Emirates), but the squad was disbanded at the end of 2017 as the bike manufacturer scaled back its sponsorship commitments. By then, Hirschi was already a European bronze medallist, and Sunweb quickly snapped him up for their development squad.

Hirschi’s best displays that season came with the Swiss U23 team, where he credited their shared military service during the winter of 2017-18 for creating the esprit de corps that saw young riders with fierce individual ambitions devote themselves to a common cause at the Worlds.

"Most of the team did the army service together, so we lived together the whole winter, for 17 weeks," he said.

As an under-23 rider, Hirschi impressed across a range of terrains – he took sixth at the Tour of Flanders and fourth at the Tour de l’Ain – but speaking to Cyclingnews in the early months of his pro career, he hazarded that his future might lie in the Ardennes Classics.

"It’s still quite difficult to say what kind of rider I will become, but if I have to say,  then I can be a one-day rider in races like Liège-Bastogne-Liège and the Ardennes Classics in general," Hirschi said, although he was speaking to Cyclingnews just days after finishing 10th after an attacking display at the E3 BinckBank Classic. He acknowledged that, at some far-off point in the future, he would also like to test himself as a stage racer.

By the end of his debut season, meanwhile, Hirschi went on to place third behind Evenepoel at the Clásica de San Sebastián and fifth at the BinckBank Tour. The coronavirus pandemic interrupted Hirschi’s sophomore season in March, but he returned to action at the Critérium du Dauphiné in August and caught the eye with two solid displays in mountainous terrain on the final weekend. Despite his tender years, Sunweb opted to include him in their Tour de France team, leaving established names like Michael Matthews and Sam Oomen off the roster.

On Sunday evening, the Sunweb team quickly availed of Hirschi’s fine display to bury the news that, after Marcel Kittel, Warren Barguil and Tom Dumoulin, yet another high-profile rider has opted to rescind his contract a year ahead of schedule. Matthews’ disappointment at missing out on selection for the Tour was so apparent that there was little surprise in Sunday evening’s confirmation that he will not remain with Sunweb in 2021, with it later announced that he will return to Australian WorldTour team Mitchelton-Scott.

In the here and now, Sunweb’s nominal Tour leader, Tiesj Benoot, lost more than 17 minutes on stage 2. Hirschi, meanwhile, currently lies third overall, just seven seconds off Alaphilippe’s maillot jaune, although he downplayed the idea that he would look to divest the Frenchman of the jersey in the days ahead, politely insisting that his ambitions for the Tour are the same now as they were at the outset.

"I’ll take it day by day," Hirschi said. "I want to for sure defend the white jersey as long as I can, but my goals will stay the same: I will try to go in the breakaway and go for stages."