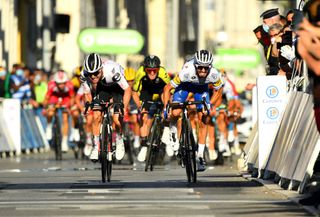 The trio broke away from the peloton on the final climb of the Col des Quatre Chemins after Alaphilippe and Hirschi had initially broken away before being joined by Yates. The group worked together on the descent into Nice with Yates leading them into the final few hundred metres as the peloton gave chase.  In a tense finale, Alaphilippe went early and held off the late challenge from Hirschi, with Yates taking third.

“I just came across to Julian Alaphilippe and Hirschi and then we started working on the descent. There was a block headwind coming into the final and it wasn’t super easy. In the end, I was never going to win the sprint, them too were both faster than me but to come third on stage 2, I’m pretty happy with that,” Yates said at the finish.

The result, including precious bonus seconds, moved Yates into second on GC, although coming into the race his focus was on stage wins after he endured an illness hit summer. When asked if he could have changed tactics in order to win today’s stage, the British climber was realistic with his assessment.

“Maybe if there was another climb or something, but like I said, in a sprint with them two, on this kind of finish, I was always going to end up second or third. All in all, it was a good day.

“We rode the climb at a solid pace and you could feel the fatigue when we rode up it the first time. A lot of people were suffering, just like me. The little fella wasn’t contributing much but in the end we started working well. Third was the best I could get.”

Yates’ performance puts him second overall in the race, four seconds off the lead. However, the 28-year-old remains focused on stage wins for now. This is such a strange Tour, however, run under such peculiar circumstances that it’s far too early to assume that he will simply sit up and lose time in order to go for more stages.

“I said to the team last winter that I waned to come to the Tour and be aggressive in the first week. They’ve allowed me to do that and there’s plenty of opportunities to come.”

Matt White praised Yates’ ride, especially for the manner in which he chased down the two leaders on the final climb and then gave everything before the sprint. The Mitchelton-Scott director will take heart from his rider’s performance this early in the race, especially with so many more chances still to come.

“It’s not a normal stage 2 of the Tour de France and with the special bonus seconds as well there as an added incentive for the yellow jersey if a group could stay away. It has, Alaphilippe is in yellow but that was a great ride today by Adam when he bridged across to the two leaders,” White said.