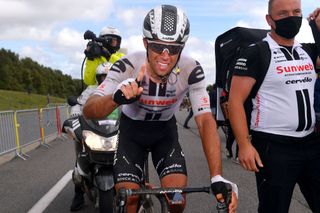 Michael Matthews will leave Sunweb at the end of this season after reaching an agreement to rescind his contract with the team a year before its expiration. The 29-year-old has yet to confirm his new team for 2021.

The Australian becomes the fourth high-profile rider to negotiate an early departure from Iwan Spekenbrink’s team in recent seasons after Marcel Kittel, Warren Barguil and Tom Dumoulin all left the German-registered outfit before the end of their contracts.

Matthews had been a surprise omission from Sunweb’s team for the 2020 Tour de France and he is also due to miss October’s rescheduled Belgian Classics as he is due to form part of their squad at the Giro d’Italia. The Australian won the Bretagne Classic in Plouay earlier this week.

Michael Matthews ruled out of Il Lombardia with hand injury

Sunweb announced the news in a press release dispatched on Sunday evening, barely two hours after their rider Marc Hirschi had placed second on stage 2 of the Tour in Nice.

In the statement, the team said that Matthews had “indicated that the team’s tactical approach to the sprints and classics […] doesn’t precisely fit his athletic profile nor his preference of being the team’s targeted fast finisher,” adding: “The team’s evolution of tactics for classics and sprints made Matthews request to look for new opportunities after 2020 elsewhere. The team decided to cooperate on the move.”

Matthews joined Sunweb from Mitchelton-Scott in 2017 and he marked his debut season at the team with two stage wins and the green jersey at the Tour, as well as fourth place at Liège-Bastogne-Liège. He won the Grand Prix de Québec and the Grand Prix de Montréal in 2018, winning again in Québec in 2019.

The 29-year-old had extended his contract with Sunweb on the eve of last year’s Tour, where he unexpectedly found himself leading the team after Dumoulin was forced out through injury.

“The team is very ambitious and increasingly want to work with a broader collective of riders deeper in the finales of classics and sprint races. Those tactics do not ideally fit with my ambitions and specific strengths to sprint for the wins. For that reason, I decided to ask permission to investigate opportunities to look for a different team and I appreciate that Team Sunweb was open for this,” Matthews said in the statement released on Sunday.

“I always have been very happy with the team’s professional environment and the wealth of knowledge that they have. I hope that I can find a similar environment in my next team.”

Sunweb have already announced the arrival of Romain Bardet from AG2R La Mondiale for 2021, though they have lost Dutch talent Sam Oomen to Jumbo-Visma, while Wilco Kelderman also looks set to leave the team.

Spekenbrink described Matthews as “an incredibly gifted rider” but said his team wanted to “exploit [its] broadened collective strength in the classics and the sprints.”