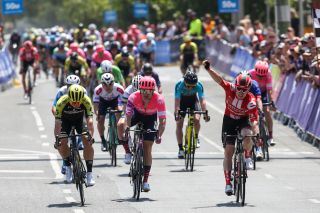 He only joined the WorldTour at the start of January but Alberto Dainese has already made a name for himself with a stage win at the Herald Sun Tour and several top-ten finishes throughout the three stage races that he has already completed in 2020.

Although the season has paused due to the coronavirus, and Dainese is back home in Italy, Cyclingnews caught up with the 2019 U23 European road champion at last month’s UAE Tour to find out a bit more.

Cyclingnews: You’ve had a really good start to your WorldTour career with results at the Tour Down Under and then a win in the Herald Sun Tour. Did you expect such a successful start?

Alberto Dainese: I knew that I was going to be the team's sprinter in these races and I was keen to be racing with the WorldTour guys. I think that I’ve had a good start so far but I’m still struggling with positioning before the sprint. It’s also not easy without a leadout man. It’s meant that on some stages I’ve been too far back in the sprint and I’ve had to go early, but I’m still learning.

CN: Tell us about how you got into cycling.

AD: Actually I was playing basketball for about five or six years but when I was about 14 years old I started riding for a small local team and things just continued from there. I'm not sure why I started with cycling to be honest but I think it was maybe due to the influence of my grandfather. He was a cyclist in the past, at a local amateur level, and when I was staying at my grandparents I was always watching the Giro and the Tour.

CN: What’s your first memory of watching those races?

AD: I remember watching the TV and thinking that the riders made it look a lot easier than it really was but I also recall watching Bradley Wiggins and Mark Cavendish winning everything and Peter Sagan won the first of his three stages in the Tour de France. It must have been 2012, I think.

CN: Did you always want to be sprinter or was that something you’ve had to really work on?

AD: Actually I was more of a climber in my first year but that was when I was a junior. Then I developed more into a sprinter. It was a natural progression and I found it easier to develop my speed and my tactics. Also, when you’re younger it’s a lot easier to go to races and try and get results if you have a fast finish.

CN: You won the European championships last year at the U23 level. How much was that a breakthrough for you?

AD: This was a huge victory for me. Last year I raced for the SEG U23 team in the Netherlands.  I was there for 18 months and the race was in Holland so it almost felt like winning on home soil. I went with SEG at U23 level because I felt that they were my best stepping stone before moving into the WorldTour. If I had stayed in Italy then I probably would have only done local criteriums and a few smaller races. At SEG they gave me a good calendar that included some races with the pros. It was a great experience for me to progress as a rider, and I’ve seen a number of riders come through their ranks in the last few year and make an impression on the WorldTour, like Edoardo Affini, Cees Bol and Fabio Jakobsen.

CN: So why did you turn pro with Team Sunweb?

AD: Quite simply, they were the best option when it came to improving. They’ve proven over the years to be one of the best sprint teams, first with Marcel Kittel and then with John Degenkolb. They’ve been really supportive in a number of ways, so maybe one of the biggest changes or differences between U23 racing and WorldTour racing is the speed in the last kilometre.

At this level, if you’re not in a good position then you need to make an extra effort and once you’ve done that you’re empty for the finish. You need to combine positioning with staying fresh so the team has really helped me work on that because if you’re 20th when the sprint starts then you’ve no chance.

Going forward, I just want to keep developing and then hopefully I can win some races.