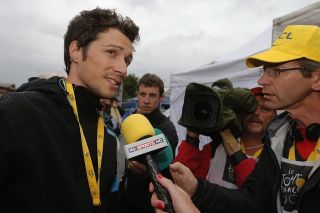 A native of the southwest of France, Pierre Carrey closely covered the late Nicolas Portal’s career as a rider and later as a directeur sportif. The following article originally appeared in Libération.

His heart derailed for the first time in 2009: Nicolas Portal was then a professional bike rider, a canard from the Gers. The cardiologist had warned him: "Have you taken [doping] products? Now is the time to tell me, because if you've taken hormonal products, I'll see it quickly." Portal said "no". The tests said no. He had surgery for cardiac arrhythmia. He was made to rest for six months. His contract with his team was torn up, proof that sport was finished for him. The doctor added: "There's a risk… You understand? A risk that the heart might stop. Do you really want to keep riding?"

On Tuesday evening, the heart didn't start again. A heart attack at forty. The emergency services, who rushed to the apartment in Andorra where he lived with his wife and two children, couldn't do anything. The man who, in the intervening period, had become directeur sportif of Team Ineos (formerly Team Sky), and one of the most garlanded in history with six Tours de France, has died of a heart attack, at an age where some haven't even stopped racing.

At the start of this year, dreaming of adding another yellow jersey and unbridling a new generation – the Russian Pavel Sivakov, the Irishman Eddie Dunbar – he was nevertheless modest: "It's Egan [Bernal] who will decide on what men to have around him. Otherwise, I'll go back to basics. I'll put together a team of young riders to enjoy myself, or a mountain bike team to share my first discipline," he confided to us.

"Nicolas was human, beyond the numbers," says his friend Denis Briscadieu, head of the Culture Velo chain of bike shops and Portal's first mentor. In fact, Portal's was the incongruous humanism amid the so-called cool and robotic cohort of Team Ineos. The go-to man of one of the most dominant teams in modern sport, which totted up its algorithmic certainties.

He was surprised by it himself: having been a rider on the British team in 2010 after his heart operation, at a time when Team Sky wasn't yet Team Sky, his bosses offered him a role as a strategist and leader of troops. "You see, you don't speak English, but everybody understands you," the manager Dave Brailsford had told him. For Portal, it was an unimaginable compliment.

Nicolas Portal was the son of a quarry foreman and a mother who raised him, and first sold local produce before working as a medical secretary. Born in Auch, in the Gers department, two hours from the Pyrenean passes, he initially saw himself as a binman, drawn by those men who go from house to house in the early hours of the morning. Then as a professional moto-cross rider.

His younger brother Sébastien was also a cyclist, on the Crédit Agricole team. Portal's years in the peloton (2002-2010) were years fit to lower one's head in depression: Lance Armstrong was scorching the earth, and nothing seemed able to resist him. French riders contented themselves with crumbs.

Signed by the AG2R team, he won a stage of the Critérium du Dauphiné in 2004, arriving alone in the streets of Aubenas. In the mountains, he thanked the supporters who encouraged him, the behaviour of a well raised boy, but out of place amid the beastliness of the effort.

He was withering in a team that was still old-fashioned, while he dreamt of a hedonistic spirit, more surfer than cyclist. That needed to change. The Gersois blossomed as an équipier in Spain, with Caisse d'Epargne. In 2006, he won the Tour de France as a domestique of the Spaniard Oscar Pereiro. His peers asked themselves: why did he go elsewhere?

Portal swore that he was not affected by the village gossip anymore. As a cyclist in Spain, he was ipso facto suspected of doping by the French milieu. The same as a directeur sportif at Team Sky. At the very least, he was seen as their cover, the lover of magret de canard alongside skeletal riders.

It's true that in 2013, Portal was angered by the radio and television commentators, former professionals like Laurent Jalabert or Cyrille Guimard, who suspected the worst of Chris Froome, namely, of winning on a bike with a motor. He fought for principles bigger than his contract, against this pointed indignation, the perverse product of heroes and villains, and an overly convenient scale of values.

He only did his own job and not that of the doctor: analysing ordnance survey maps right down to the thicket blown by the crosswind, plotting revolts or counter-revolts past midnight, verifying training plans, feeding on spreadsheets of data, flooding the internal messaging service until 3 o'clock, still in his pyjamas and without having had the time to eat a slice of bread and jam. This nec plus ultra of sport, a ladder towards an idea of perfection, had convinced him not to change teams despite better remunerated offers elsewhere.

"What do you want me to tell you?"

Again and again, Portal had to justify himself. Previously, he had suffered from the doping of others who won ahead of him, as much as from the allegations of doping himself – a double penalty. "What do you want me to tell you?"

Here is what he refused to talk about in public: on the 2006 Tour de France, while he had to defend the yellow jersey of Pereiro, a doctor proposed a pharmaceutical programme to him that bordered on the invincible. Portal refused. The doctor left him saying: "You're the one who's right."

Nicolas Portal didn't judge his adversaries or the spirits he had in his charge, but he sought to make them better. Never cynical, always cheerful because he managed to make someone laugh or play some music on the Sky bus, which people wrongly took for an armoured train.

He brought a breath of fresh air, reassurance, a morsel of kindness to the happy climber Egan Bernal, to the Welsh tippler Geraint Thomas, to the understated but thunderous Chris Froome and the rocker Bradley Wiggins, and before that again, to a family business that became a multinational, a circus tent torn up by its clans, a world of peasants destroyed by money, a sport of doubts where solitude is the worst hardship, where one spends a long time searching for someone who isn't a traitor or an enemy, a profiteer, an imposter, a stealer of glory.

In 2010, he was the only cyclist from Team Sky to attend the funeral of a Basque soigneur, Txema González, who was tragically taken away during the Vuelta a España, more or less at the same age, 43. His boss Brailsford was struck by the feeling that Portal put into his relations and that was when he imagined him directing Sky-Ineos towards the summits: "Nicolas, I need to talk to you…"