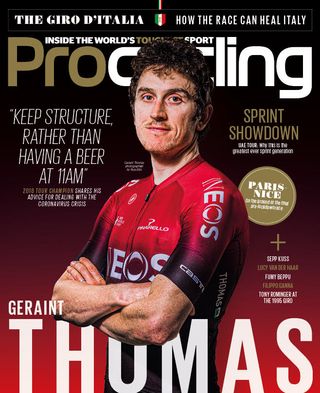 Ahead of the news that the Tour de France has been rescheduled for the end of August, Geraint Thomas spoke to Procycling about life under lockdown, and how he is “hungry” to taste success at the Tour again.

Thomas, who won the maillot jaune in 2018, but finished second behind teammate Egan Bernal last year, said that the experience of being a runner-up after being a winner did spur him on to win it again. Speaking in March, he said: “Not in a way of being against Egan, or anything like that, but it does. It makes you hungry.”

Thomas decided to head back to Cardiff from his European base in Monaco “just because it’s better for them here in a house with a garden, rather than in an apartment,” the Welshman told Alisdair Fotheringham. Here, Thomas has spent a lot of time in his garage riding a trio of 12-hour home trainer rides - designed to mirror a hospital workers’ shift - to raise money for NHS charities.

The COVID-19 pandemic led to the cancellation of the entire spring calendar, with Paris-Nice the last race before the season was indefinitely curtailed. With a number of WorldTour teams avoiding the race altogether, “gung-ho, demob-dippy racing” and the final stage in Nice eventually cancelled, Daniel Friebe was in France to witness a unique edition of the Race to the Sun.

The Giro d’Italia was one of the first major races to be postponed this May, with the UCI and organisers RCS now looking to reschedule the race for autumn. Barry Ryan examines the impact the loss of the Giro will have on cycling and looks at its place within its home country Italy.

He writes: “The country must stop bleeding before sport can begin to be applied as a balm.”

The early season UAE Tour has become one of the only places in the season to see the majority of the world's best sprinters all race against each other. Sophie Smith was in the Middle East to take a look at the modern world of sprinting for Procycling, where five of the six top sprinters; Caleb Ewan, Dylan Groenewegen, Pascal Ackerman, Sam Bennett, and Fernando Gaviria, all went head to head.

One rider who appeared to be having a good 2020 season so far was Sepp Kuss. Jeremy Whittle spoke to the young American climber, who was due to be a key part of Jumbo-Visma’s Tour plans, about how he is still learning.

Lucy van der Haar had the best start to 2020, with a stage win and the overall title at the inaugural Women’s Dubai Tour, her first victories in five years. The Briton was a double junior world champion and she told Sophie Hurcom about the pressure of living up to expectations, and how it has taken time to adapt to senior racing. “I’m still not where I want to be but in the past couple of years I’ve found my place again,” she explained.

A rider at the other end of his career, Fumiyuki Beppu, spoke to Ed Pickering about his journey through cycling, and how he still feels young at 37. He said: “I’m happy to be a professional cyclist but I also get meaning from meeting a lot of smiling people all over the world.”

Also in the magazine this month, Filippo Ganna on balancing his road and track ambitions, and a look back at the Swiss master Tony Rominger.