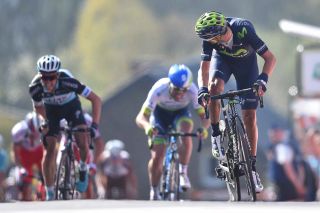 If Gent-Wevelgem is the middle child of the cobbled Classics, then Flèche Wallonne is its counterpart for the final week of the spring Classics. Flèche Wallonne's accent-grave older sibling, Liège-Bastogne-Liège, and the much younger stepchild, Amstel Gold Race, now make up the Ardennes Classics.

Before Amstel was created in 1966, the Ardennes were just the mid-week Flèche and La Doyenne – which was already 44 when Flèche came along in 1936. In its younger years, Flèche was unsettled, and bounced around the calendar with different starts and finishes in search of a home.

The first edition of the Belgian race started in Tournai, before moving to Mons and then on to Charleroi, with distances varying from 205km to 280km. In 1951, it settled in next to its older sister as the Ardennes Weekend – back-to-back days of racing around Liège – and settled on a roughly 220km course.

For a few years in the 1960s, Flèche was a post-script for Liège-Bastogne-Liège, flipping directions from a Liège start and a Charleroi finish. In 1965, it was uprooted from the weekend slot and went adrift again both on the calendar and with its route before growing up and setting down roots with the current Huy finale in 1983.

Since then, the start cities have changed, and the route has been slightly tinkered with, but the steep pitches of the finishing climb of the Mur de Huy have determined the winner every year.

Cyclingnews has looked at the results from all 83 editions of Flèche Wallonne, teasing out the statistics, stories, facts and figures of race.

Alejandro Valverde put his first stamp on Flèche Wallonne in 2006 in only his second foray into the Ardennes Classics. It was a banner year for the Murcian, who went on to podium at the Tour de Romandie and establish himself as a Tour de France contender with seventh at the Critérium du Dauphiné, but he crashed out on stage 3 with a broken collarbone.

What followed were several years of being implicated then cleared in Operacion Puerto, then finally banned after the Italian authorities linked Valverde to blood evidence by DNA testing. The Spaniard continued racing and winning – taking second at Flèche in 2007 and winning Liège-Bastogne-Liège in 2008 – through 2010 when he was finally sanctioned after a CAS decision.

After coming back in 2012, Valverde struggled in the Ardennes, but quickly got his legs back, landing on the podium in Liège-Bastogne-Liège in 2013 and then winning Flèche Wallonne in 2014.

He went on to win on the Mur de Huy four times in a row to become the outright record holder for most victories at the race, and has done the Flèche/Liège Ardennes double three times – in 2006, 2015 and 2017 – but has never won the Amstel Gold Race to hold the triple.

Valverde has hardly put a foot wrong when it comes to Flèche Wallonne, landing on the podium twice when he wasn't winning. He missed out to Davide Rebellin in 2007 and passed the torch, finally, to Julian Alaphilippe in 2018.

Moreno Argentin and Eddy Merckx have the second-most podiums with five each and three wins apiece.

Dan Martin and Jan Janssen have the most podium finishes without victories: two second places and one third apiece.

Dutchman Joop Zoetemelk raced Fléche Wallonne the most number of times, finishing 17 times over the course of his long career. But his most famous ride was in 1976, when he went the wrong way and still managed to win.

This was before the days of the Mur de Huy, when the race began and ended in Verviers. Zoetemelk attacked on the Stockeu and was being chased by the great Eddy Merckx and Freddy Maertens.

Pounding on the pedals for more than 40km, Zoetemelk had built up a lead of several minutes. With his head down and his focus on getting to the finish line, all of a sudden he found himself on an eerily quiet street, with no fans and no barriers. He'd gone the wrong way.

Fortunately, his team car informed him of the mistake, and he was able to turn around and find the right way to the finish line in plenty of time to take his only victory at Flèche.

Swiss rider Michael Albasini raced Flèche Wallonne 13 times over the course of his career and finished inside the top 10 eight times – but never managed to win.

Albasini came close: he couldn't quite match the acceleration of Joaquim Rodriguez in 2012 but held off Philippe Gilbert for second. In 2015, it was Valverde who timed his surge to perfection, while Albasini was beaten for second by Alaphilippe.

Albasini had planned to retire this year before the race was cancelled because of the coronavirus pandemic. He may never race again or perhaps he will be inspired to give it one more go and see if he can finally bag a win at Flèche.

Belgian rider Pino Cerami was still in the full swing of his career when he won the 1960 Flèche Wallonne at the age of 38 years and 12 days. He soloed in for the win in Charleroi by half a minute over Frenchman Pierre Beuffeuil and Stan Goosens. Cerami won Paris-Roubaix that year, too.

He kept winning through to the ripe old age of 41 when he won a stage in the 1963 Tour de France, and then retired at the end of that year.

Davide Rebellin is the oldest modern-day winner, taking the victory on the Mur de Huy in 2009 at the age of 37 years and 257 days.

Philémon De Meersman won the 1936 edition of Flèche Wallonne at 21 years and 150 days – five months younger than Eddy Merckx was when 'The Cannibal' won the race in 1967.

The race doesn't favour youth much, however, as Julian Alaphilippe is the next youngest to claim the title at age 25.

A solid tailwind for the first 66km helped make the 2004 edition of Flèche the fastest in history at a whopping 44.08kph – although the race was undoubtedly sped along by the EPO era that was still in full swing.

A large peloton came to the base of the Mur de Huy after numerous splits and breakaways, with T-Mobile's Matthias Kessler and Danilo Di Luca (Saeco) making the first accelerations. But Gerolsteiner's Davide Rebellin, who'd won the Amstel Gold Race a few days previously, was lurking right behind them and, despite Di Luca forcing the pace on the steepest pitch, Rebellin was still there.

As the gradient eased in the final 100m, Rebellin finally pounced to snatch the win at the fastest-ever edition.

The early years were much slower as the race had yet to attract the top stars, so 1937's edition, won by Adolph Braeckeveldt, crawled along at a lumbering 30.1kph. It was also the longest edition of the race at 280km from Tournai to Ans. Of the 84 starters, only 19 finished, and it took Braekckeveldt more than nine hours to get to the finish with Marcel Kint.

Of the modern editions, the 2017 race was the slowest when it was won by Alejandro Valverde. Although it was one of the shorter courses at 200.5km, it took five-and-a-quarter hours at 38.12kph for the race to finish.

The last 30 years of Flèche Wallonne have skewed the overall average upwards. The reduction in length of the race from around 250km to 200km led to much quicker pacing through to 2010.

The average speeds have trended downwards over the past decade, however, falling from a 42kph average in the mid-2000s to just above 40kph in 2019.

The Mur de Huy is certainly a selective finish, but the severity of the climb has hampered breakaways.

Even with the inclusion of the Côte d'Ereffe (2.1km at 5%), the Côte de Cherave (1.3km 8.1%), the 1.3km finishing climb with pitches in the double digits strikes enough fear into the hearts of the escape artists that none have managed to stay clear since Igor Astarloa beat Aitor Osa in a two-man breakaway in 2003.

Before the Mur de Huy became the race's finale, there were plenty of editions that ended up in rather large sprints, but the hills of the Ardennes were selective enough to make it a sprinter's race.

The biggest group that came to the line together was when the race ended in Mons in 1981, and Daniel Willems beat Adri van der Poel to the line for the victory out of a group of 36.

The early years had big winning margins, but Fausto Coppi's 1950 victory was the biggest of all: the great Italian soloed in a full 5:05 ahead of Raymond Impanis.

Since the finish was moved to Huy, there have only been a handful of solo winning moves: Kim Andersen's 1984 gap of 3:39 was the largest since Coppi, although in 1986, Laurent Fignon came close when he beat Jean-Claude Leclercq by three minutes.