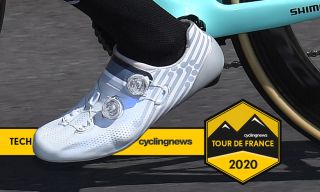 As a cyclist, the wrong choice of footwear can disassemble months and months of hard training in a flash. All that hard work and countless hours of saddle time might leave you with the power of Tadej Pogacar or Sam Bennett's sprint, but an ill-fitting pair of shoes and the pain will return you to earth faster than you can undo your Boa dials. In contrast, the best cycling shoes will combine maximum comfort with ultimate stiffness to help harness your power and ensure that every last watt goes through the pedals and isn't lost to flex.

For many riders in the Tour de France, sponsors obligations mean the choice is restricted to that of a single brand. Jumbo-Visma and Team Sunweb for example are sponsored by Shimano, likewise Deceuninck-QuickStep and Bora-Hansgrohe with Specialized. These riders can be left in a difficult position if their sponsor's shoes don't fit quite right; upset their sponsors by wearing a competitor's shoes, or please the sponsors while risking the pain.

Other teams (such as Ineos Grenadiers) remain sponsor-free in this regard, allowing their riders to pick and choose their shoes. For this reason, it's been a common sight over the years to see Geraint Thomas sporting Fizik next to Chris Froome in Sidis. It would be unsurprising for the team to be unable to obtain a shoe sponsorship deal, so it's more likely that Dave Brailsford's men have chalked this up as a 'marginal gain'.

One great thing about cycling is that - even if you're as rubbish as me - you can ride on the same roads as your heroes, you can use the same bike, don the same kit and wear the same shoes. Good luck turning up to Wembley in your finest England kit and having a kick about, or knocking on the door of the United Center and shooting some hoops in your Bulls kit. Not happening.

So as with our recent sunglasses roundup, here you'll find a selection of riders from this year's Tour de France, their choice of footwear (sponsor correct or otherwise), and we'll give you clues on where you can get them at the best price, so that you too, can wear Sagan's shoes or Kristoff's kicks.

Disclaimer: this isn't Like Mike, and although new shoes make you feel great and morale watts are absolutely a thing, you probably won't get a 400w FTP as soon as you put them on. Sorry.

Specialized S-Works 7
Deceuninck-QuickStep is heavily kitted out by Specialized, including everything from bikes and wheels to helmets and shoes. On the latter, Specialized doesn't shy away from high-end options, and many consider its S-Works 7 shoes to be the best on the market. They're super stiff, competitively light, and once you've broken them in, they are unbelievably comfortable. It's perhaps unsurprising then that, just like the majority of his team, Alaphilippe uses them. But if £360 is too cheap for you, try Michael Mørkøv's S-Works Exos shoes, which will set you back around £450.

Shimano S-Phyre RC901 (custom)
Bennett, like the majority of his Jumbo-Visma team, is wearing Shimano's S-Phyre RC901 shoes, even though the brand has recently launched newer versions in the RC902 - as seen worn by Wout Van Aert. If you want Bennett's exact shoe design, you'll have to get in touch with his artist girlfriend Caitlin Fielder, who custom paints shoes for many of the WorldTour riders.

Sidi Shot
Mitchelton Scott is a team without a shoe sponsor, leaving Yates to choose his footwear at will and he's decided in favour of Sidi Shot shoes. With a range of adjustability and a reputation for being immediately comfortable, the Briton's choice of footwear is matched by riders such as Rigoberto Uran, Chris Froome and Stage 13 winner Dani Martínez.

Rapha Pro Team Powerweave
Powless' EF Pro Cycling team is technically sponsored by Rapha who supplies the team's stylish pink and blue kit, however, while we're not privy to the details of the agreement, it seems as though there's an acceptance when it comes to shoes. Powless is wearing Rapha Pro Team Powerweave shoes, but as mentioned above, Uran and Martinez are in Sidi and Hugh Carthy is in Shimano.

The Powerweave shoes are currently a road-only shoe, but gravel-riders rejoice, it looks like a gravel version is on its way.

Mavic Comete Ultimate
If your pockets are really (...really really) deep, then look no further than the Mavic Comete Ultimate shoes being ridden by Dan Martin. They are made in two parts, with an internal bootie and an external exoshell. They're really lightweight, they're super comfortable, but they're £630 ($770) a pair. Better get saving.

Giro Imperial
Pinot's Groupama-FDJ team is sponsored by Giro for their shoes and helmets, and from the extensive Giro cycling shoes range, the Frenchman has opted for the Imperials. In our Giro Imperial review, our tech editor gave them a healthy four out of five stars. They're not the most budget-friendly shoes available with an RRP of $425.00, but you didn't expect a Tour de France GC contender to be wearing the budget option, did you?

Fizik Infinito R1
Arkea Samsic don't have a footwear sponsor, so likely borne out of his time at Movistar, the Colombian's choice of footwear is the Fizik Infinito R1. In our recent Fizik Infinito R1 shoes review, we rated them at four stars and Quintana is far from alone in his choice. Geraint Thomas, and much of the Fizik-sponsored Movistar team have opted for the same.