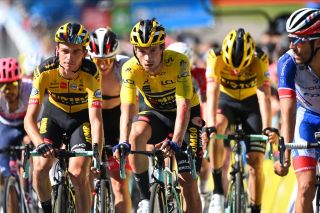 An injured Primoz Roglic (Jumbo-Visma) comes home at the end of stage 4 of the 2020 Critérium du Dauphiné. The Slovenian was a non-starter for the final stage the next day. (Image credit: Bettini Photo)

Jumbo-Visma leader Primoz Roglic is remaining hopeful that he will be able to recover sufficiently from his crash at last week's Critérium du Dauphiné to start – and be competitive at – this year's Tour de France, which starts in Nice in a little over a week's time.

"Did a little spin yesterday," Roglic wrote on Instagram on Thursday, accompanying it with a picture of him on his home trainer, and still showing bandages covering his left elbow.

"I honestly thought that I would feel better by now after the crash on Saturday at the Critérium du Dauphiné," he added, suggesting that he actually doesn't yet feel better.

"Let's see what the upcoming days bring. I'm staying optimistic," he wrote, signing off with, "Bisous [kisses], Rogla from Tignes."

Roglic and his Tour teammates have remained in the French Alps – based in the ski resort of Tignes – following the Dauphiné. Despite crashing, Roglic retained his race lead following stage 4, but chose not to start the fifth and final stage, with the race lead passing to Groupama-FDJ's Thibaut Pinot, although it was EF Pro Cycling's Dan Martinez who eventually came out on top as the race's overall winner.

While Roglic has been recovering, his teammate, Steven Kruijswijk – who was set to line up in Nice on August 29 as one of the Dutch WorldTour team's leaders alongside Roglic and Tom Dumoulin – was forced to admit defeat in his battle for fitness, having crashed earlier on the same Dauphiné stage.

"Unfortunately, the consequences of my crash in the Dauphiné turned out to be more serious than hoped," the Dutchman said on Thursday morning. "To my great disappointment, I cannot participate in the Tour de France due to a shoulder fracture and the many abrasions.

"I wish the team the best of luck at the Tour, and I am very disappointed that I cannot be part of it," said Kruijswijk, who will be replaced in Jumbo-Visma's eight-rider squad by Norway's Amund Grondahl Jansen.

Did a little spinn yesterday. I honestly thought that I will feel better by now after the crash on saturday @criteriumdudauphine 🤕 Let's see what upcomming days will bring. I am staying optimistic. Bisous, Rogla from Tignes @jumbovisma_road #cycling #cyclinglife #ridebianchi #samenwinnen #jumbovisma @tignesofficiel Primoz Roglic