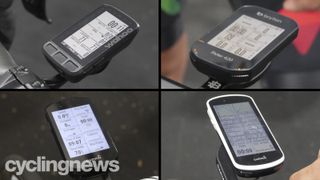 Welcome to part 2 of our anorak-friendly series on the pro peloton's data screens. Whilst roaming the pits at the Santos Tour Down Under, we've been getting up close and personal with some of the pro peloton's cycling computers to get an insight into their minds on race days.

Being January, not all riders' head units were completely race-ready when we caught up with them, but where possible, we've grabbed the riders for a quick chat to talk us through what data they need to do their day job.

As we touched on in part 1, some carefully curate their screens to provide a myriad of metrics, while others are content with little more than a map.

The number of bikes without a power meter here at the Tour Down Under can be counted on zero hands, and while not all riders will use the data themselves, it has become a staple part of a coaches analysis.

As mentioned in part one, data can cause more harm than good, and Vini Zabù-KTM manager Luca Scinto has cited this as a reason in his recent move to ban riders from using power meters and heart rate monitors during racing.

"The riders are obsessed with watts," Scinto told La Gazzetta dello Sport. "They allow themselves to be influenced too much by it. During training it's good to use a power meter but not in a race."

Whether or not power meters belong in the WorldTour is a contentious topic with many differing opinions. Over the years, Alberto Contador, Nairo Quintana, Christian Prudhomme and Nico Portal have all made their feelings on the subject clear.

But for as long as they remain, there will be riders who take advantage of the technology, for better or worse.

In this section, we've got another time triallist in Alex Dowsett; one of the sprinters of the moment, Sam Bennett; as well as Grand Tour winner Simon Yates.

When it comes to race days, Sam Bennett has just three simple fields on his Wahoo Elemnt Roam. As one of the pro peloton's fastest sprinters, Bennett's duties lie in the final 300m of a race.

Undoubtedly, a lot of work goes in to ensure he gets there in peak condition, but for Bennett, the only data he chooses to see is as follows:

It's on training days that Bennett looks for more info. As a sprinter, it's unsurprising to see him having a data field for maximum five-second power. We wonder what the biggest number that field has ever displayed. We'll be sure to ask.

Dowsett only got his new Bryton Rider 420 computer a day before we caught up with him, but confirmed his data screen is "more-or-less" race-day ready. As a TT specialist, you'd be forgiven for thinking Dowsett would be purely interested in the numbers, but although his primary screen supplies plenty of quantitative data, Dowsett's attention lies elsewhere.

"Maps, in a road race, is what I look at more than anything," Dowsett stated.

Having a birds-eye-view of the upcoming corners can make descending at race pace a considerably safer affair, and like others, a map holds most importance to Dowsett when racing on unfamiliar roads.

Ahead of his inaugural outing in the WorldTour for new team Movistar, Gabriel 'Gabz' Cullaigh let us have a quick snap of his Garmin Edge 530, on which he had the following data displayed:

American Neilson Powless is another rider disinterested in the numbers, instead, using his head unit to provide foresight. His Garmin Edge 1030 delivers:

"On race day I'd probably set it with time, distance and the map," Powless explained. "Normally, when we have the course on there, it'll have course points to tell us when a right turn is coming, if there's going to be crosswinds, if a climb is coming up, how long a climb is and what percentage it averages. It's good to have information pop up on the map screen. Then there's distance-to-destination so I know how much further we have to race, and then the time just so I know for fuelling and how much to eat."

When queried on whether power information is important at all, Powless said: "Not too much when racing, no. I've found that I've been able to race better when not having it. Occasionally I will toss it on there if it's something like a mountain stage or a 20-plus-minute climb. It's a bit more useful if I'm trying to set a certain pace, but for a race like [the Tour Down Under] I'd probably just leave it with time, distance and map."

Catching up with Simon Yates in early January meant that his Garmin Edge wasn't quite ready for race day. Instead for training, Yates has sunset and time of day included due to living in the UK, where the sunset is currently a painfully early 4:30 PM.

"You know when the black screen of death comes down, you've messed up," Yates joked.