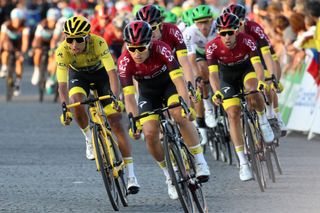 Team Ineos are arguably the best team of the last decade, having won the Tour de France six times since 2012 while in their former guise of Team Sky, and then a seventh time with Egan Bernal as Team Ineos in 2019.

Sky's blue-and-black jersey was swapped for the burgundy and black of Ineos mid-way through the 2019 season, but the team continued to dominate much of the sport and looks set for more success in 2020 with Giro d'Italia winner Richard Carapaz, Rohan Dennis and a number of very talented young riders joining up with Chris Froome, Geraint Thomas, Michał Kwiatkowski, Pavel Sivakov and Tao Geoghegan Hart.

Team Ineos are the marmite of pro cycling, with their detractors as numerous as their fans. The team management and sponsors do not seem to care, and Dave Brailsford makes sure his bot-like riders are focused and successful rather than outgoing and original.

Ineos took over title sponsorship from Sky in the spring of 2019, with the team determined to create a smooth transfer and continue their run of success. Their spring Classics campaign was again lacking a major victory and show of force, but Bernal further revealed the depth of his talents by winning Paris-Nice with an aggressive ride in the echelons and bad weather.

Sivakov and Geoghegan Hart combined to beat Vincenzo Nibali at the Tour of the Alps, with the young Russian going on to finish an impressive ninth overall at the Giro d'Italia. Chris Froome suffered multiple fractures while studying the time trial course at the Critérium du Dauphiné, momentarily rocking the team, but Bernal won the Tour de Suisse to give a sign of what was to come in France in July.

Thomas and Bernal started the Tour de France as joint team leaders, avoiding mishaps and marking Julian Alaphilippe before Bernal made his move on the Col de l'Iseran during the shortened stage to Tignes. He went on to become the first-ever Colombian to win La Grande Boucle and, at just 22, the youngest winner in more than 100 years. Thomas joined him on the podium to give Team Ineos a rare, but indicative, 1-2 in Paris.

Sivakov won the Tour de Pologne but the team made little impact at the Vuelta a España, with Bernal taking their 26th and final win of 2019 at Gran Piemonte.

Egan Bernal: The former mountain-bike racer has always appeared destined for greatness and confirmed it in 2019 with victory at the Tour de France. Bernal oozes class and calm, with his climbing and bike skills making him perfectly suited to the three-week demands of Grand Tour racing. Gianni Savio, who helped Bernal turn professional at 19 and then sold him on to Dave Brailsford, warned it was the start of the Bernal era. It definitely feels like it, and Bernal will be back at the Tour de France in 2020.

Chris Froome: Multiple fractures, including an open femur fracture, would have convinced most 34-year-old riders to retire, but Froome is determined to make a comeback and ride the 2020 Tour de France, even if he faces a race against time to be at his best in July.

Geraint Thomas: The likeable Welshman insists his 2018 Tour de France victory has left him wanting more. However, he turns 34 in May and may have to work for Bernal if he turns down the chance to lead at the Giro d'Italia.

Richard Carapaz: The 26-year-old Ecuadorian has joined from Movistar, further strengthening Team Ineos' Grand Tour roster and probably strengthening calls for some kind of budget cap to end their dominance. Carapaz is expected to defend his 2019 maglia rosa in May and then ride the Vuelta a España.

Rohan Dennis: After his bitter divorce from Bahrain-Merida following his sudden abandon during the Tour de France, few teams wanted to risk hiring the highly strung Australian. Team Ineos appear to think they can harness his talents and his character.

Michał Kwiatkowski: The Polish rider's many talents are sacrificed at the Tour de France but he can arguably win every race apart from a Grand Tour. He would lead any other team in the WorldTour but is the joker in the Team Ineos pack of aces.

Team Ineos have used their big budget, talented riders and disciplined approach to stack up marginal gains and emerge as the very best super team in the men's WorldTour.

Each season is built around victory at the Tour de France and, while the likes of Julian Alaphilippe (Deceuninck-QuickStep) and Thibaut Pinot (Groupama-FDJ) may show more panache, Team Ineos' methodology always helps them limit any loses and then emerge in the all-important third week. They have elevated winning the Tour de France to a fine art, leaving just a few crumbs for their rivals.

The Team Ineos roster includes some successful and skilled Classics riders but, for one reason or another, the British team has almost always struggled in the Monument Classics and one-day races. Kwiatkowski won the 2017 Strade Bianche and Milan-San Remo, and Wout Poels won the 2016 Liège-Bastogne-Liège, but Ian Stannard, Luke Rowe and, more recently, Gianni Moscon seem to have gradually lost their way.

The roster is understandably tipped towards Grand Tours and stage races but leaves Team Ineos lacking a dimension to their success as one of the best teams in the history of the sport.

Team Sky – and now Team Ineos – have shaped the last decade of the men's WorldTour and look set to continue their Tour de France dominance for another decade with Egan Bernal. They could even aim to win all three Grand Tours in 2020.

Team management have suggested Ineos' business strategy and control of the team allow for a new approach. This could mean the team has less of a British feel going forward. British riders have now won the Tour de France; now it's perhaps about winning again and again.