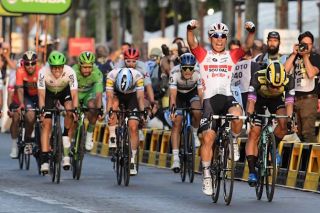 We have already put together our list of transfer flops of 2019 but now it’s the turn of the successes from this season. Including riders who have moved up from Continental teams, as well as riders who have transferred between WorldTour teams, we pick out 10 of the highest profile and most prosperous rider moves of the year.

This year has been nothing short of startling for the 21-year-old Pogacar who has enjoyed a meteoric rise since his transition from the Continental ranks. Third overall in his Grand Tour debut was special enough but the climber’s star has shone almost since the first pedal strokes of 2019. A stage and the overall in the Volta ao Algarve was backed up with another strong ride in the Basque Country before a another stage and another GC win in the Amgen Tour of California. Then came the Vuelta a España, with three stage wins and third place overall, just 22 seconds behind second-placed Alejandro Valverde.

When Ewan failed to score a win in his home race at the Tour Down Under one could also sense the pressure starting to mount on the Australian sprinter. However, a win at Hatta Dam in the UAE Tour was followed by two stages at the Tour of Turkey, before those all-important wins at the Giro d’Italia in May. Those victories seemed to set Ewan on the right course, with the former Mitchelton rider winning three stages in his debut Tour de France. There were some challenging moments during the season, not least missing out on a win during the Australian phase of the campaign, but if Ewan is judged on the races he left Mitchelton for – the Giro and, more importantly, the Tour – then 2019 was a resounding success. The shoes of Andre Greipel have well and truly been filled and Lotto Soudal have their sprinting mainstay for the next decade.

While several of Dimension Data’s 2019 recruits fluffed their lines this year, Nizzolo passed his induction with flying colours. The Italian claimed three out of seven of the team’s wins, with victories in Slovenia, the Tour of Oman and the Vuelta a Burgos. He may have failed to complete both the Giro d’Italia and the Tour de France, but the 30-year-old’s consistency dragged the team along at certain points in the year. With Mark Cavendish leaving the team, Nizzolo may find himself with more support and opportunities in 2020, and while the former Trek rider will never have the pure speed of some of his rivals, any additional leadout reinforcements should at least see a greater return in top five results.

Alberto Bettiol hadn’t even won a professional bike race until this year, but the Italian opened his account in style with a dominant and clinical performance at the Tour of Flanders in April. In the process, the 25-year-old rubbished the adage that you should never go back, having left Slipstream at the end of 2017 in a bid to step up at BMC Racing. The Swiss-American team subsequently folded but before CCC Team could draw up a contract, Bettiol was on his way back to Jonathan Vaughters’ argyle squad. Even if Bettiol fails to win another race for the rest of his career – though that seems unlikely – he will always be able to call himself a Monument winner, while his 2019 was also peppered with several top-five placings.

Sticking with the BMC Racing exodus, we turn to Belgian Dylan Teuns, who after a winless 2018 turned in several winning performances for his new team. There was the typical level of consistency one expects of Teuns’ results sheet, but there was also a stage win and brief stint in the lead at the Critérium du Dauphiné, and an eventual sixth place overall. The Belgian followed up with a stage in the Tour de France, and second place on stage 6 of the Vuelta a Espana. Teuns is a rider who can compete throughout the season, on a number of terrains, and 2019 once again showcased his versatility. Still only 27, the all-rounder still has plenty of years to improve.

You’d be forgiven for wondering who Carl Fredrik Hagen was at the start of the year but the 28-year-old neo-professional turned in a number of classy performances to suggest that moving into the WorldTour at such a late stage in his career was far from the gamble it looked at the start of the year. A late bloomer, the Norwegian was handed an almost exclusively stage race based programme this year that included the Tour Down Under, Volta ao Algarve, Tour de Romandie and the Tour of Norway. His third place on the final stage in the Dauphiné was superb but it paled in comparison to his eighth place overall in the Vuelta a Espana. Granted, he finished inside the top ten just once during the race, and was almost invisible at times, but the former Joker rider still finished ahead of several more established WorldTour pros. Not bad for a maiden Grand Tour and for a rider who was virtually riding without teammates during the most brutal mountain stage.

Bahrain Merida were leading the chase for the talented Teunissen, but it was Jumbo Visma who eventually won the race for the Dutchman’s signature and the 27-year-old has paid them back in spades with a string of high-profile rides. First came a top 10 finish in Paris-Roubaix, followed by two stages and the overall in the 4 Jours de Dunkerque, and the GC at the ZLM Tour. However, Teunissen left those wins in his wake at the Tour de France with a victory on the opening stage in Brussels and then a successful defense of the maillot jaune the following day in the team time trial. There were a couple of tense moments when Jumbo Visma didn’t appear in complete control of their leadout but this was still a resounding successful transfer for both the team and, of course, Teunissen himself. The second half of the season saw several decent rides in Hamburg and the BinckBank Tour, to name just a couple, and with the rider tied to the team for the next three years, Jumbo Visma should see the best of their new recruit.

Tony Martin’s best time trialling years are behind him, but the German has solidified his position as one of the most hard-working and robust domestiques in the world, while his move from Katusha to Jumbo Visma has breathed new life into the German’s career. At Katusha, the former time trial world champion often looked lost and devoid of purpose, but Jumbo Visma have reinvigorated his career. Whether it’s in Grand Tours, or week-long races, Martin was ever-present when required, while the step away from the Classics experiment looks to have paid off handsomely.

Trek-Segafredo only had to wait five days into Ciccone’s time on the team for the Italian to open his account with a stage win at Tour du Haut-Var in February. The Italian then struck again with his second career stage win at the Giro d’Italia and his first Grand Tour mountains classification. While most riders would have considered that a successful haul in the opening campaign at WorldTour level, Ciccone returned at the Tour and duly wore yellow for two days courtesy of his second-place finish at La Planche des Belles Filles. The second portion of the season tailed off in comparison but the former Bardiani rider heads into 2020 with his stature on the team greatly improved.

Ben Swift deserves an honourable mention and he too rescued his career with a move from UAE Team Emirates to Team Ineos, but Ganna gets the nod simply because he won more races. The Italian may not have caused any shockwaves during his opening season at Ineos but he still impressed with a closely fought Italian national time trial title, a TT win in Binck Bank, third in the Worlds TT and second in the Chrono des Nations.