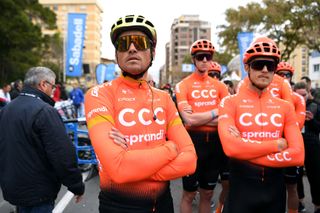 Opening Weekend is upon us. Saturday's Omloop Het Nieuwsblad and Sunday's Kuurne-Brussel-Kuurne mark the start of the Classics season in Belgium. If racing has already been happening since the start of January, this is where it really gets serious.

We're still several weeks away from the Tour of Flanders, so this weekend is not the be-all and end-all, but it's nevertheless an important first test for the cobbled specialists and a tone-setter for the spring as a whole.

From up-and-coming riders looking to grasp an opportunity and those with a point to prove, to dark horses and those who thrive in the grim conditions forecast, there are plenty of intriguing names and storylines. We've picked out 10 riders – not necessarily the pre-race favourites – to watch out for this weekend.

The Belgian newspapers are indispensable when it comes to reading the runes ahead of the Classics, and the one name that’s generating the most excitement at the moment is that of Dylan Teuns.

The Bahrain McLaren rider is one of the least experienced riders on this list when it comes to the cobbled Classics but his form – fifth overall at both the Volta a la Comunitat Valencia and Vuelta a Andalucía, with a time trial victory at the latter – is such that he’s seen as the home nation’s best shot at the Omloop.

The only reason Teuns lacks experience on the cobbles is that he’s so good everywhere else. With podiums at Il Lombardia and La Flèche Wallonne, overall victory at the Tour de Pologne, 12th at last year’s Vuelta a España, and wins in uphill finishes and time trials, he’s a true all-rounder who is still improving.

His experience in the Flemish Classics has been limited but his fifth place at last year’s Omloop prompted a fuller spring schedule this year. Proof of his potential goes back even further; 10 years ago, he won the junior version of the Omloop.

The rider with the white jersey with bright rainbow bands across it might not be the most subtle choice here, but Mads Pedersen is an interesting one to watch for a couple of reasons.

Firstly, it’s unclear whether he has the form to be competitive. "We are still feeling a bit unsure about his condition," said a Trek-Segafredo director after a recent training camp in Mallorca. With Jasper Stuyven and Edward Theuns in the squad, there is a hierarchy still to be defined.

On the other hand, if there’s anyone who’s going to thrive in the wind, rain, and cold, it’s Pedersen, who proved so emphatically at Worlds his ability to absorb grim conditions while they suck the life out of his rivals.

Another rider who's well-known for going well in wet conditions, Tim Wellens looks like Lotto Soudal's clear leader for the Omloop. Philippe Gilbert is a two-time winner – and holder of four different Monuments – but has struggled with illness recently, and the difference in their condition was underlined by their respective places in Algarve - fifth and 31st.

Wellens has been a somewhat reluctant participant in the cobbled Classics in the last couple of years, not hiding his preference for the Ardennes. And yet he has impressed at pretty much every turn since his cobbled debut at the 2018 Omloop.

He was an attacking force there and returned to finish on the podium last year, prompting a debut at the Tour of Flanders, where he'll return this year. He’s a rider you sense has a lot more to bring to – and take from – the cobbles.

Two for the price of one here, as this is not so much about Matteo Trentin himself as his new partnership with Greg Van Avermaet, and the clues this weekend will offer as to how the pair will combine over the spring.

Van Avermaet, a double Omloop winner in good form, has rarely worked with a co-leader, with Philippe Gilbert largely kept away from the cobbled Classics during those acrimonious few years at BMC. Trentin, meanwhile, used to ride for QuickStep, where the game is always about numbers.

While there’s no suggestion of animosity, the pair have hardly been gushing in their praise for one another, and there are murmurs of a somewhat lukewarm – if not cold – relationship between them. Can they play off each other to the mutual benefit of the team, and how will they do it?

Will Trentin hang back and wait for a possible sprint, while Van Avermaet has more freedom to open the races early? Or will Trentin be sent up the road, leaving Van Avermaet in the backseat with less to worry about? In any case, CCC needs a win, wherever it comes from.

Deceuninck-QuickStep won both races last year and once again have an unmatched array of options. While the winners of those races, Zdenek Štybar and Bob Jungels, arguably sit above him in the food chain – along with two-time Dwars door Vlaanderen winner Yves Lampaert – Kasper Asgreen could break through as a leading light for the Belgian squad this spring.

Last year was his debut Classics campaign and he caught the eye throughout, even though he was mostly flogging himself for his teammates. He managed to work his way into the Tour of Flanders team and turned it into an opportunity of his own with a remarkable ride to finish runner-up.

Asgreen only turned pro halfway through 2018, as QuickStep were short on numbers. After winning a world title in the team time trial and riding his first Grand Tour at the Vuelta, 2019  saw the Flanders podium along with third overall (and a stage win) at the Tour of California, plus a Tour de France debut. It’s been a whirlwind rise for Asgreen so far. Who knows where it will end.

While some riders can afford themselves the luxury of precisely picking their peaks, fending off any pressure until April, others need a performance wherever they can get it.

Michael Valgren is a former winner of Omloop and Amstel Gold Race but after a dismal first spring with NTT, you sense he needs to hit the ground running here. After all, there should be no real concerns about holding his form given he won Omloop (late February) and Amstel (mid-April) in the same season.

It wasn’t just Valgren who underperformed last year, but the team as a whole. Sickness played a part but it was a collective failure. Bjarne Riis, a fellow Dane, has taken over the management of the team and it remains to be seen how quickly he can make an impact. If he can bring out the Michael Valgren of 2018, it'd be a big turning point for the team.

Owain Doull's second-place finish at last year's Kuurne-Brussel-Kuurne felt like something of a breakthrough. The Welshman, like Bradley Wiggins and Geraint Thomas, had won Olympic team pursuit gold, but his early progress at Team Ineos was slow, with Wiggins himself saying he'd "gone backwards".

There's more potential for Doull to realise and, while Ineos are far from short of top riders, he might just have the space to do it. The British team have won the Omloop three times but have largely struggled in the cobbled Classics over the years.

Ian Stannard, responsible for two of those wins and a Paris-Roubaix podium, seems to have lost his way, while Gianni Moscon remains a shadow of the rider he was a couple of years ago. Luke Rowe has shown he’s capable, without landing that big result, while Dylan van Baarle has produced little from his first two springs at Ineos.

At their best, all those riders are capable of competing, but, given they haven't been, an opportunity is there to be grabbed by Doull, who should be full of confidence after a neat win at the Tour de la Provence.

The Belgian rider has not lined up at a road race in more than seven months, during which time his career was cast in doubt after that horror crash at last year's Tour de France.

Rehabilitation has been long and slow but Van Aert has shown signs that he'll return to full strength. He put in a few cyclo-cross appearances in the winter, including an impressive fourth-place finish at Worlds after a puncture.

Whether the Jumbo-Visma leader will be firing on all cylinders this weekend remains to be seen, given he wasn't even supposed to be here – until the coronavirus outbreak threatened the first races on his programme. That said, he recently beat Chris Froome’s record time on a climb on Mount Teide in Tenerife, so he can't be going badly.

Tiesj Benoot was once the new poster boy for Belgian cycling, and while he has hardly been a flop, more than Strade Bianche and a stage of the Tour of Denmark was expected of the kid who was fifth in his first Flanders.

Benoot signed a bumper three-year contract with Belgian squad Lotto Soudal after those promising first two seasons as a pro, but he has now looked for fresh impetus in his career with a move away to Sunweb. He’ll make his debut for the team at the Omloop this weekend, after a long stint of altitude training on Mount Teide.

Another versatile rider who has aspirations in week-long stage races, Benoot is also targeting the Ardennes Classics, but his best spring results – with the obvious exception of that victory on the gravel roads of Tuscany – have come in the Flemish Classics.

Matteo Trentin's departure to CCC Team leaves a window of opportunity at Mitchelton-Scott this spring.

Luke Durbridge has shown his potential in recent years and is on the cusp of a big result, but there's also the 25-year-old Alexander Edmondson, who's a former winner of the U23 Tour of Flanders.

He missed last year's Classics through injury and is determined to start making an impact this time around. He has even skipped the Australian summer to spend his pre-season in European winter. Third in the recent Vuelta a Andalucía time trial is an indication he’s in good shape.