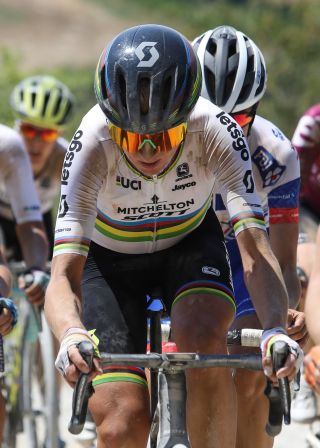 One fundamental characteristic of athletes, especially cyclists, is that our ability to deal with change is higher than average – we train for it.

The circumstances surrounding the coronavirus have put athletes on another level when dealing with disappointment, changing schedules and training plans. We're now just living day-by-day. It's been an ultimate challenge to test our flexibility.

Strade Bianche is an excellent example of how immediately our situations can change. The breakaway was gone after 90 kilometres of racing. I thought we weren't going to bring them back or see them again, and I wasn't going to be able to use my legs. The race was over.

Ten kilometres later, my director Alejandro said [over the radio] that the group was five minutes in front, but Amanda Spratt, who was in that group, wasn't feeling well. He said it was time for me to take action and attack wherever I could.

In the space of 10 kilometres, I went from thinking that it would be a chill ride to the finish to having to change my mindset suddenly – it was time to attack.

These situations happen a lot in races, and having the ability to adjust to them is probably one characteristic that all cyclists have in common. We are good at making fast decisions.

The World Championships in Aigle-Martigny, Switzerland, was a really big goal for me. I read about it being cancelled, and I know the UCI will try to find a different date and location, but who knows? This year, because of COVID-19, everything is continually changing, and I am just living day-by-day. As athletes, we really like to plan the whole year, but this year we cannot expect a lot, and so I know that this is hard for many of us.

For me, personally, if I have a race that's just one week away, then I start to believe that it will happen. Many journalists have asked me if I felt the revised season was too crowded and whether it was possible to compete in all the events. They have also questioned whether it was possible to compete in the Giro Rosa [September 11-19] being so close to the time trial at the World Championships [September 21].

I don't want to worry about things that might not happen. I try to be flexible and focus only on what I have under my control. I make plans with the knowledge that they might have to change. It's the ultimate challenge to use our flexibility skills as athletes, to race at the events that are organised, and to stay motivated even without a clear plan.