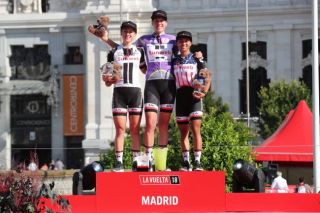 The Women’s WorldTour heads to Spain for the two-day Madrid Challenge by la Vuelta on September 14 and 15 in Madrid. The race is held in conjunction with the finish of the men’s Vuelta España and includes an individual time trial and a circuit race.

The women will compete in a new individual time trial, which replaces the previous year's team time trial won by Team Sunweb. This year’s version of the race against the clock is 9.3km that starts and finishes in Boadilla del Monte.

The circuit is on the technical side, with roughly eight corners and roundabouts, but it is mainly flat and will suit the most powerful time triallists.

Ellen van Dijk won the overall classification at the 2018 Madrid Challenge after her former team, Sunweb, won the team time trial and she was sixth in the circuit race.

The Dutch time trial specialist, who now races for Trek-Segafredo, will not be able to defend her title after she broke her arm and pelvis in a crash at the Boels Ladies Tour.

Trek-Segafredo will be on the start line, as will the top teams in the world including Boels Dolmans, Sunweb, WNT-Rotor, Mitchelton-Scott, Valcar-Cylance, Movistar and Ale Cipollini.

Some of the fastest time triallists will be on the start line in what will be a final tune-up ahead of the UCI Road World Championships held in Yorkshire at the end of the month.

Former world champion in the discipline Lisa Brennauer (WNT-Rotor) will be looking to see how she stacks up against the other time triallists.  Sunweb’s Lucinda Brand is also a favourite to watch for the time trial win.

Trek-Segafredo bring Ruth Winder, who won the prologue at the Lotto Belgium Tour this earlier this week, and will look to continue her late-season success. Cogeas Mettler bring Olympic medallist Olga Zabelinskaya.

The circuit race will once again cater to the sprinters in the field. Look for Kirsten Wild (WNT-Rotor) to secure the victory.

She will face former two-time winner Jolien D’hoore (Boels Dolmans), Chloe Hosking (Ale Cipollini), Elisa Balsamo (Valcar-Cylance) and Letizia Paternoster (Trek-Segafredo) in what promises to be an captivating finale to the two-day event.