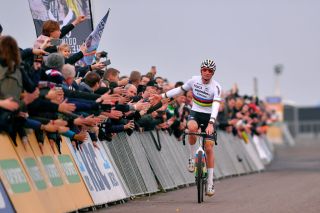 World champion Mathieu van der Poel was again dominant in the DVV Trofee round in Sint-Niklaas. The Dutchman soloed in ahead of Quinten Hermans (Telenet-Fidea) and Tom Pidcock.

Hermans took the lead early in the C2 Waaslandcross with Van der Poel and Zdenek Stybar (Deceuninck-Quickstep) on his wheel.

An attack from Pidcock shattered the lead group when he rode a climb the others opted to run, and Van der Poel had to shut down the gap.

The world champion led into the sand on lap four and when Hermans bobbled just behind, Van der Poel started to carve out his winning advantage.

As he kept opening up the lead, the rest fought for the podium spots, with Hermans getting the better of Pidcock and Wietse Bosmans, who came in fourth. Stybar fought in for sixth behind Jens Adams.