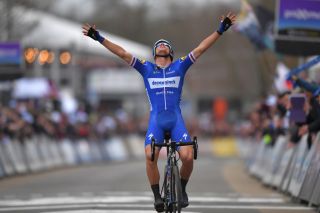 The Omloop Het Nieuwsblad and Kuurne-Brussel-Kuurne are no strangers to adverse weather, and it seems that the wind and rain that has blasted northern Europe for the past month will stick around to provide a gruelling introduction to the Classics campaign this weekend.

The Omloop and Kuurne take place on the last weekend of February and are collectively referred to as 'Opening Weekend'. There's now a heavy schedule of racing across the globe in the first two months of the year but this still represents the start of the Classics season in Belgium and, for some, the true start of the season altogether.

However, in the increasingly specialised and targeted world of professional cycling, many will be treating Opening Weekend as preparation, too, given that the main prizes of the spring are still weeks away. After this, the riders will go off to Paris-Nice and Tirreno-Adriatico before reconvening for Milan-San Remo on March 21 to take on the main Classics period, which runs through to Paris-Roubaix on the second Sunday of April.

Revamped route could put Kuurne-Brussel-Kuurne beyond reach of sprinters

Either way, Opening Weekend marks a shift from the warm-weather races that ease riders into their seasons in Australia, South America, southern Spain, and the Middle East. Both the Omloop and Kuurne have been cancelled due to snow in the past 15 years, while Kuurne was memorably hit by a cyclone in 2010. The current forecasts suggest heavy rain and persistent southerly winds, with gusts reaching 80kph.

Some riders will be licking their lips, such as world champion Mads Pedersen (Trek-Segafredo), who loves grim weather and surfed the Yorkshire deluge on his way to the world title in September. Tim Wellens (Lotto Soudal) is another who goes well in the rain, while the likes of Greg Van Avermaet (CCC Team) and Mathieu van der Poel (Alpecin-Fenix) make no secret of their preference for more clement conditions.

As is always the case in Belgium in the spring, the weather can have just as big an impact as form. While the Omloop sticks with a familiar parcours that takes inspiration from the Tour of Flanders, this year Kuurne – which has been kinder to the sprinters over the years – is putting on a tougher and more selective route. If the wind and rain do materialise, there could be quite the rate of attrition – and entertainment – on both days.

The Omloop Net Nieuwsblad celebrates its 75th birthday on Saturday, having first been held back in 1945. With three cancellations along the way, this is the 72nd edition.

This year's route isn't exactly in keeping with tradition but, virtually identical to last year, it's what's becoming the modern version of the Omloop. After a decade of starting and finishing in Gent, the organisers changed things up in 2018 by adopting the old finale of the Tour of Flanders, with the late ascents of the Muur van Geraardsbergen and the Bosberg. Last year, the finish line was moved a few kilometres from the main road in Meerbeke to the centre of Ninove, and that will be repeated this time.

Leaving Gent after signing on in the famous 't Kuipke velodrome, the riders will head south into the Flemish Ardennes to take on 13 hellingen – the short, sharp climbs that characterise that part of the north Belgian countryside – and nine sectors of cobblestones.

The first test comes after 40km, with the combination of the Haghoek cobbles and the Leberg climb, ahead of a snaking 90km loop that takes in the climbs of Den Ast, Katteberg, Haghoeck-Leberg again, Rekelberg and Valkenberg. Things then intensify with 55km to go with the Wolvenberg, Molenberg, Leberg, Berendries and Eikenberg. After a 10-kilometre respite, the endgame comes with the famous Muur van Geraardsbergen and its hill-top chapel, closely followed by the Bosberg. A 13-kilometre run-in follows, leaving plenty of room for tactical games and a turning of the tables.

Kuurne has never shied away from the hills of the Flemish Ardennes but the final climb has traditionally featured around 50km from the finish, meaning sprinters have often been able to triumph. Despite Dylan Groenewegen's bunch-sprint win two years ago, the recent trend has been for more attritional racing and solo winners, and the organisers seem to have been so pleased, they're keen to ensure the same outcome from now on.

"I think it was time to do something else," race director Peter Debaveye said recently. "The pure sprinters are going to find a more complicated route beneath their wheels."

The race actually features two fewer climbs compared to last year, and the final climb still comes some 50km out from the finish. However, this year's climbs are tougher – or the tougher ones come later – and the old final ascent, the gentle Knokereberg, has been replaced by the Kluisberg. From 77km out, the riders will take on the Kruisberg, Hotond, Côte du Trieu, and Oude Kwaremont before hitting the Kluisberg.

What's more, instead of returning to Kuurne for two laps of the 15km finishing circuit, this time there's just one lap, with a tougher run-in to it, featuring narrower roads and the Beerbosstraat cobbles – described by Debaveye as "spicy".

Most of the Classics riders who'll be going for victory at the Tour of Flanders in early April will be on the start lines in Gent and Kuurne. However, as mentioned, some deem the Opening Weekend dispensable. Peter Sagan (Bora-Hansgrohe) is the biggest absentee, skipping it for a third time in a row since winning Kuurne and placing second at the Omloop in 2017. Also absent are Wout van Aert (Jumbo-Visma), 2019 Flanders champion Alberto Bettiol (EF Pro Cycling) and Michael Matthews (Sunweb).

As ever, Deceuninck-QuickStep appear to be the strongest collective force in the race, despite the departure of Philippe Gilbert to Lotto Soudal over the winter, and Niki Terpstra to Direct Energie the year before that. While Julian Alaphilippe will be parachuted in for Flanders, Deceuninck-QuickStep field an almost full-strength squad, featuring both races' reigning champions in Zdenek Stybar and Bob Jungels. Also capable of a result at the Omloop are Yves Lampaert, Kasper Asgreen – second at Flanders last year – and Florian Senechal, while they must not believe the Kuurne organisers, as they've drafted in sprinter Fabio Jakobsen for Sunday.

This weekend will be the first opportunity to see how effectively the Greg Van Avermaet and Matteo Trentin partnership can work at CCC Team this spring. The former, in particular, is said to be in fine form, but dislikes cold and wet conditions. Lotto Soudal, meanwhile, have a couple of cards for the Omloop in Philippe Gilbert and Tim Wellens, although the latter might be favoured given Gilbert's recent illness. The Belgian squad is resting John Degenkolb on Saturday to give him the best possible crack at Kuurne on Sunday.

Trek-Segafredo once again have an attractive squad on paper but will be hoping for a change in fortunes after a miserable few springs in the post-Fabian Cancellara era. Perhaps world road race champion Mads Pedersen can inspire them to greater things, but they also have Jasper Stuyven, Edward Theuns, Alex Kirsch, and newly signed young talent Quinn Simmons.

Mathieu van der Poel (Alpecin-Fenix) will be universally feared, especially after an impressive road season debut in Algarve, while there's much hype surrounding the in-form Dylan Teuns (Bahrain McLaren), who can seemingly do it all. Another Belgian who can climb better than is strictly necessary here is Tiesj Benoot, who makes his debut for Sunweb. Oliver Naesen (AG2R La Mondiale) and Sep Vanmarcke (EF Pro Cycling) are two more thoroughbred Belgian Classics riders who should have a say.

Team Ineos have largely struggled at the cobbled Classics, and even if two-time Omloop winner Ian Stannard seems to have lost his way, Luke Rowe still has the potential for big things. They also have Dylan van Baarle and Owain Doull; the latter was second last year and recently won a stage in Provence.

Winner of the 2018 Omloop, Michael Valgren (NTT Pro Cycling), will want to make a point after a terrible 2019, and so will Niki Terpstra, even if his disappointing first season with Direct Energie was down to crashes. Other riders who could make an impact include Alexander Kristoff (UAE Team Emirates), Nils Politt (Israel Start-Up Nation), the Mitchelton-Scott duo of Luke Durbridge and Alexander Edmondson, Sunweb's Cees Bol – winner of a sprint at the Volta ao Algarve – as well as Sonny Colbrelli (Bahrain McLaren), Mike Teunissen (Jumbo-Visma), Lukas Postlberger (Bora-Hansgrohe) and Julien Vermote (Cofidis).