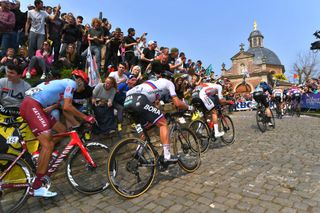 Racing up the Muur Van Geraardsbergen at the 2019 Tour of Flanders (Image credit: Getty Images)

The Classics season is fast approaching, with the ‘Opening Weekend’ just over a week away, bringing the first instalment of cobbled racing at Omloop Het Nieuwsblad and Kuurne-Brussel-Kuurne.

When it comes to building a Classics team for the arduous campaign that runs all the way through until Paris-Roubaix on the second Sunday of April, there are several key factors that teams need to be conscious of, with form, illness and momentum all playing their parts.

This winter, we sat down with EF Pro Cycling’s Andreas Klier, himself a former Classics specialist, to take us through his plans and approach to the cobbled races.

Cyclingnews: Opening Weekend is the first marker in a long Classics campaign. What are you looking for at that point in the season in terms of your Classics riders?

Andreas Klier: Well, from a form point of view, you can improve after the Opening Weekend but the tricky part is making sure that you’re not yet at 100 per cent at that point. There’s a long way to go between Opening Weekend and the Tour of Flanders and Paris-Roubaix, but you also don’t want to race Omloop Het Nieuwsblad and Kuurne-Bruxelles-Kuurne and fail.

There’s no point in just rolling over the line in 24th place, telling everyone thank you very much and that you’re looking forward to Flanders. To keep the balance, performance-wise, is hard and the influence I have there isn’t huge because that’s more down to the rider and the coach than me sat in the team car and saying ‘hey, the Kwaremont is coming up’.

I’m sure that someone like Tom Boonen, and the other uber-talents basically, won races like Het Nieuwsblad with bad form and then went even faster when it counted. Don’t misunderstand me, Het Nieuwsblad and Kuurne are big races, and they’re hard, but if you can choose when to peak then you’d pick Roubaix or Flanders.

CN: Can you experiment with line-ups for Opening Weekend or is it important to already have your squad settled, with everyone knowing your strongest roster?

AK: I like to know before Opening Weekend who is in the core group for the races coming up. I want to know who is at 70, 80, 90 or 100 per cent at that point, and although you might change plans over that period because a lot of factors come into play with Paris-Nice and Tirreno Adriatico, having a settled team is crucial.

In those stages races after Opening Weekend, the guys are basically eating kilometres, suffering in the mountains, and fine-tuning. If you’re already at 80 per cent and finish Het Nieuwsblad with a good result then those stage races become a bit less stressful and you’ll reach Belgium after Milan-San Remo with your confidence high.

CN: It sounds like momentum from Opening Weekend is absolutely crucial then?

AK: It’s important to remember that if you’re born in Belgium and you live there then Opening Weekend is a major event but if I talk to someone from Boulder they probably don’t know the difference between Het Nieuwsblad and Nokere Koerse, for instance.

To win Het Nieuwsblad, you don’t win by accident but then you have to factor in that not all riders can win Flanders. So if you think that you can’t climb well enough for a race as demanding as Flanders, or the distance is a problem for you, then maybe you try and peak for Nieuwsblad and then momentum isn’t as important. You might have a better chance with that tactic, too, because few riders try and peak that early. It’s all about balance, and sometimes it’s also about opportunities for riders who might not be the usual leaders to step forward.

Back to Paris-Nice and Tirreno, it’s important to stay fit and healthy. Results are looked at and within the team, we have daily reports as part of the performance group. You read them carefully at this point in the Classics campaign, maybe more than at other times because you want to see what’s going on. I can’t be in two places at once so I’ll be in regular contact with the directors at the race I’m not attending.

CN: Going back to the start of the year how many riders will make up the Classics group?

AK: You’re looking at roughly 10. With 10, you’re safe. You try and start the first race with a full roster of healthy riders but Opening Weekend isn’t easy so you want to protect your athletes as and when you can. That might mean that if you’re a high-class helper you’ll roll over the line and take it easy after helping your leader in the first race. Then if there’s rain in Kuurne the question becomes whether you send that rider home and draft in a young kid that will be fresh. That young rider might not be able to take the full responsibility of the rider you’ve replaced but they’ll still be able to help the team and at the end of the weekend, your super important helper hasn’t gone too deep.

The nicest present that you can bring with you from Paris-Nice or Tirreno before returning for the rest of the cobbled races is a strong performance in one of those races. It doesn’t have to be a win, it might be third on a slightly uphill finish, and no one else might care or notice but it might be the indication that you need to prove that you’ve made steps forward.

CN: So when you saw the TT results from Tirreno in 2019 when you had two riders in the top four [ed. Alberto Bettiol was second and Sebastian Langeveld was fourth], was that something you took notice of in terms of the Classics?

AK: We didn’t make a big deal about it and we knew that while that time trial was important, the Tour of Flanders isn’t 14 kilometres long.

CN: 14km, that’s roughly how long Bettiol was away for in Flanders.

CN: Did you look at that data and say to Bettiol, ‘look, these are the numbers you did at Tirreno. It’s not at the end of a 280km race but…’

AK: I spoke to him in his room before Flanders. I said that if you’re alone at this point it’s going to be around 15-20km and if you do what you did in Tirreno then you’ll give yourself a chance. You can’t ever influence what happens behind you, and if they catch you, they catch you, but you can try. He was lucky in a sense because there were too many to chase. If there had been four riders chasing then they would have had a better chance of catching him but they didn’t.

CN: In that block of races, once you return to Belgium after Milan-San Remo, what can you do with riders in terms of improving their form?

AK: You can’t really work on your form at that point. It’s really difficult and you don’t really see any big curves in power data. You can try and draw form out or, as we saw with Sep Vanmarcke last year, you can help a rider recover and motivate him after a bad crash, but it’s more about having those little tiny success stories and using them to build you up for the next race.

CN: In that period, when you’ve almost got a race every two to three days, is it more about the management of resources when it comes to riders?

AK: We’re basically camped in Belgium for three weeks. We are lucky that a number of our riders live near the hotel, so that means that they can drive home. We don’t tell them that they have to stay but the core group stays the entire time. What you want is for there to be a good flow between the group.

If you have someone who is riding the Classics for the first time, or you’ve asked them to join the group because you’ve got four sick riders then you just make sure that they have manageable expectations. If you give them something unrealistic to aim for then it breaks the flow. So you don’t tell them that they need to be at the front of the peloton at a key point, and that they then need to mark Gilbert before beating Sagan in a sprint. Instead, you give them a task that’s realistic and helps the team.

I remember a few years ago we had Phil Gaimon at Roubaix. He loved it. He did well. His task was to simply cycle as fast as he could into this first sector with as many riders on his wheel as possible, and as close to the front as possible.

CN: Can you play around with tactics in a lot of these races or is the pattern for the campaign often set by the strongest as soon as the block of racing starts? I ask because in recent years you can spot certain trends that carry through within each Classics season.

AK: To a certain point you can look at tactics but there comes a point in every race when you’re just left with the best riders and no one else. Then it comes down to how many key sectors are left, leg power, and mindset.

The races are so honest and so brutal that even with the complicated tactics the races come down to who the best riders are. If you have one rider who is much stronger than his rivals, like Van Avermaet a few years ago, then you would always bet that he would win the next race. You build your tactics around the knowledge you have of your own team and what you’ve seen from other squads but, at the end of the race, man-power is just so important.