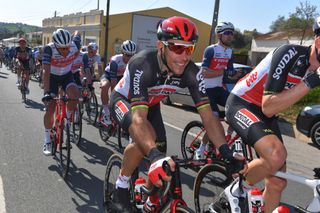 Philippe Gilbert will start Omloop Het Nieuwsblad a little way off his best form, having missed a week of training ahead of last week's Volta ao Algarve due to illness.

Gilbert told the Belga news agency on Monday that he can "feel the training delay" after being forced to rest in the week before the Portuguese stage race, although he still started the event, and finished it in 31st place overall.

Sporza reported that Lotto Soudal teammate Tim Wellens, who is set to join Gilbert on the start line for the Omloop Het Nieuwsblad at the weekend, is also fighting a cold, and said that he's "fighting not to get sick".

"I fell sick between the Volta a la Comunitat Valenciana and Algarve," Gilbert said. "I still need some time to achieve that top form.

"I was really sick, having contracted a bacterial respiratory infection. I was coughing a lot, and there was a lot of mucus, and I had a fever, so I was given antibiotics," he said.

Gilbert: The pressure this spring will be enormous

Wellens: I don't have the leadership in me like Gilbert does

"The first couple of days [of the race], I was really bad, but from Friday [stage 3], I started to feel better, which I'm pleased about."

As a result, however, Gilbert doesn't feel as though it's likely he'll be able to play a starring role on Saturday in the first Belgian one-day Classic he's won twice before, back in 2006 and 2008.

"The Omloop's coming up too quickly, but it doesn't matter," he said. "The race isn't my big goal this spring, so I'm not worried. I am looking forward to the start Saturday, but I realise that I've not had the best preparation."

Gilbert is also set to ride one-day race Strade Bianche at the start of March and Italian stage race Tirreno-Adriatico a few days later in the build-up to Milan-San Remo – the only one of cycling's five 'Monuments' missing from Gilbert's palmarès.

The 37-year-old is hoping the race won't continue to elude him for much longer.