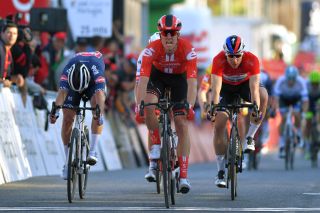 The 24-year-old triumphed on the 202km stage 3, emerging the best on the uphill finish in the 'town of churches' 25km west of the Spanish border. Bol adds the win to a burgeoning collection which includes Nokere Koerse, the final stage of the Tour of California and stage 1 of the Tour of Norway, all coming last season.

"It's a good way to start the season like this," Bol said after the finish of his third race day of the season. "With the team in the first sprint we made some mistakes, but today we nailed it. I was happy that I could finish it off."

After his team featured prominently at the head of the peloton in the final 10km, Bol was third wheel in the finale, sticking to teammate Casper Pedersen on the road into Tavira. The final kilometre saw Florian Sénèchal (Deceuninck-QuickStep) take over from Mads Würtz Schmidt (Israel Start-Up Nation) before peeling off after the final corner.

Pedersen hit the front with 400 metres to run, putting in a big push before letting go 200 metres out. Then it was Bol's time to shine, hitting the front ahead of his sprint rivals and not letting go of that spot. Points classification leader Jakobsen and Sacha Modolo (Alpecin-Fenix) jumped out on either side of Bol, but neither could close the gap to overhaul the Dutchman.

"I just followed my lead out, Casper, and when I saw the 200-metre sign, I just went full and I was first across the line. We have really more focus on the sprint this year," he added. "The guys were so strong today."

With a hilltop finish and time trial at the weekend, the Volta's sprint opportunities are over, but Bol is looking forward to next weekend and Kuurne-Brussel-Kuurne. The race is won by sprinters with semi-regularity, and the Sunweb man will hope to add his name to an honour roll which includes Tom Boonen, Mark Cavendish and Dylan Groenewegen.

"Next week in Kuurne it's a different race, but for sure we will try and do our best in the race again.

"[The win is] a sign that I did a good winter. In the winter you always hope that what you're doing is good, and when it pays off then it's really nice of course."