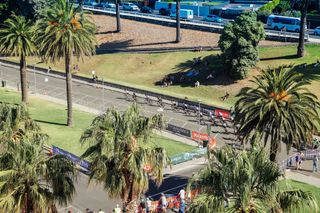 The Ritchie Boulevard circuit from above during the women's event at the 2019 Lexus Blackburn Bay Crits (Image credit: Con Chronis)

The Australian sprinter will be back for 2020, and must start as the overwhelming favourite on this course, although Lexus of Blackburn teammate Amanda Spratt will be in with a shout, while principal rivals will include national criterium champion Rebecca Wiasak (Novotel-Mitchelton) and Roxsolt Attaquer's Peta Mullens.

The first two of the three Bay Crits races switch places for 2020, which means that proceedings begin with this 650-metre-long Ritchie Boulevard circuit in Geelong, and while the racing will be hard and fast over 45 minutes, for spectators this is one of the best crits out there to enjoy, with a steep grass bank overlooking the start/finish straight providing a natural grandstand from which to watch the action.