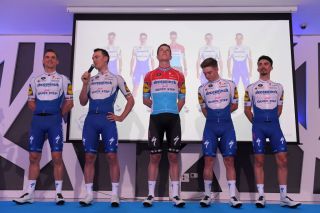 Former Belgian road race champion Yves Lampaert says that he hopes to be able to help his Deceuninck-QuickStep teammates to more victories this season, but that he's ready to take any opportunities that come his own way.

Speaking to the Belgian press at the team's training camp in Calpe, Spain, on Friday, Lampaert said that he didn't think that the departure of Philippe Gilbert to Lotto Soudal for 2020 would change things too much, and that he believes the team's now-brightest star, Julian Alaphilippe, will be in the mix when he races his first Tour of Flanders this season.

"We have won a huge amount with the team, and that's the most important thing," said Lampaert, according to Het Nieuwsblad. "Whoever wins doesn't really matter to me, as I've often had a role in those victories.

Lampaert: The most important thing is that the team wins Paris-Roubaix

Alaphilippe: There's an enormous difference between finishing 5th at the Tour de France and winning it

"Sometimes I've been limited by our team tactics," he admitted, "but luckily the race is often nevertheless finished off by someone else, and we'll take the win. It's part of being on a team like Deceuninck-QuickStep that you have to sacrifice yourself for the team from time to time.

"That will be no different in 2020, and I'm someone who has no problem with that," continued the 28-year-old, who in 2019 won the individual time trial stage of the Tour de Suisse and took the overall classification at the Tour of Slovakia, as well as finishing third at Paris-Roubaix – behind winner and teammate Gilbert and Katusha's Nils Politt – and second to Italy's Elia Viviani in the European Championships road race.

"I feel a lot of appreciation from my teammates for my attitude and my work. Everyone knows that I'm a real team player. Of course, as a rider you also like to win yourself, but I know those chances will come," said Lampaert, who's also twice won Belgian 'semi-Classic' Dwars door Vlaanderen – in 2017 and 2018 – and said that he "wouldn't say no" if there was the possibility of a third title coming his way in 2020.

A farewell to Philippe

"I don't think Phil's departure will really affect me, as I still have the same position in the team as in other years," said Lampaert of Gilbert's move to Lotto Soudal. "I was already at the same level as the other boys on the team, and I hope that the puzzle pieces will again fall together for a victory. If that doesn't happen, then I hope for a victory for the team."

This year, however, the team's talisman, Julian Alaphilippe, has thrown his hat into the ring for a maiden ride at the famous Flemish Classic.

"We'll have a very strong team for Flanders again this year," Lampaert said, "but it's important to work well together and to race for that victory."

As for Alaphilippe, Lampaert believes that the Frenchman will quickly be able to adapt to the demands of the race's cobbles and steep hellingen.

"Yes – I think he'll immediately be able to be in the mix for victory at Flanders. He's such a classy rider that he was able to win Strade Bianche at his first attempt [in 2019], and the likes of Mathieu van der Poel [Alpecin-Fenix] and Alejandro Valverde [Movistar] were able to be competitive in their first attempts at Flanders last season.

"Julian is just as good as those guys – he's such a talent – so I think he'll be competitive, too, even though he doesn't have any experience in the race," said Lampaert.