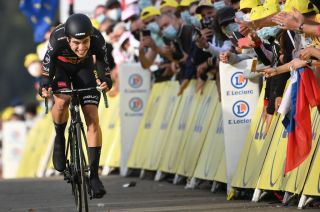 Wout van Aert is cramming more into this condensed season than many riders fit into an entire career. Already winner of Strade Bianche, Milan-San Remo and a stage of Critérium du Dauphiné in August, the Belgian added two sprint victories and a string of super-domestique cameos in the mountains of the Tour de France.

Yet when Van Aert returned home to Herentals from Paris on Monday afternoon, there was little point in unpacking his suitcase. He still has miles to go and promises to keep in 2020.

Barely 48 hours later, he was already back at Zaventem airport to catch a flight to Italy for the Road World Championships in Imola, where he is both a debutant and a consensus favourite.

Professional riders may be cocooned in a bubble in this coronavirus-interrupted season but – at least until Paris-Roubaix on October 25 – there is no shielding Van Aert from the spotlight. A cluster of microphones from Belgian television and radio awaited him outside the departures hall on Wednesday afternoon.

Wout van Aert: Grand Tour contention 'not on my list of priorities'

"I had to pack my suitcase a little too quickly, but fortunately I hadn't completely emptied it," Van Aert said, according to Sporza.

He was given dispensation to miss Tuesday's National Championships road race, but his schedule this week is still a heavy one. He lines up in the individual time trial at the Imola Worlds on Friday before leading Belgium's challenge in the road race two days later.

"I've had a relatively quiet week, and it might even be a good thing to do the time trial before the road race," he said.

Van Aert has three rainbow jerseys at elite level frjumom his cyclo-cross career, but this is his first selection for his country on the road. He described the prospect of leading the team as "a unique feeling."

No elite male rider has won both the time trial and road race world titles in the same year – only Abraham Olano has won both across a career – but Van Aert is perhaps the man most fancied to achieve the double since Miguel Indurain won gold and silver in Colombia a quarter of a century ago.

"I'm not putting too much pressure on myself. My season is already fantastic with some fantastic victories, so my season won't be bad if I miss out on the world title this week," said Van Aert, who reasoned that his medal prospects were stronger in the time trial even if his preparation – three weeks of prodigious feats of strength on the Tour – was better suited to a road race with almost 5,000m of total climbing.

"I think I have a little less of a chance in the road race because there are more external factors, but I think my preparation has been better for it."

'We should rely on our own strength'

On Thursday morning, Van Aert was in front of the microphones once again, at a press conference outside the Belgian team's hotel on the outskirts of Bologna.

The early hour was to facilitate a reconnaissance of the flat and fast 31.7km time trial course ahead of the elite women's event in the afternoon, and the 26-year-old insisted that he was not feeling the strain after completing a Grand Tour for the first time in his career.

"Physically, there is certainly no problem: the fact that I was also up there in the last week of the Tour gave me confidence," he said. "I don't feel any tiredness. It's more with the mental side that you have to be careful."

Van Aert has lined out against the watch on two occasions in 2020, winning the Belgian title in August and then placing fourth in the time trial to La Planche des Belles Filles on the penultimate day of the Tour. His satisfaction at that performance was tempered, of course, by his Jumbo-Visma leader Primož Roglič's unexpected loss of the maillot jaune to Tadej Pogačar.

"That was a disappointment, but personally I can only look back on it positively," Van Aert said. "Finishing in such a tough time trial among the top riders was a good thing. I'm glad I went all the way and didn't sit up to get some rest. I am now even more convinced that it's possible in Imola, even if it's a completely different circuit, very flat."

In that hybrid time trial to La Planche des Belles Fille, Van Aert was compelled to keep something in reserve for the final haul to the finish. No such finesse seems required the flat and fast Imola circuit.

"It's a time trial of pure strength, so that's okay for me. And in terms of length it is also fine," said Van Aert.

Although he acknowledged that he had not prepared specifically for the time trial in the manner of defending champion Rohan Dennis (Australia) or home favourite Filippo Ganna (Italy), the Belgian was bullish about his prospects.

"At Jumbo-Visma I've made a big step in terms of position and material. Having strong legs remains the most important thing. And I have them."

Raw strength is also a pre-requisite for Sunday's road race, but world titles on the road are rarely won on power alone. Van Aert admitted that his approach to the race might have been different had Remco Evenepoel been fit for selection.

"With Remco Evenepoel, there would have been a different name, and I could have aimed more for the sprint," Van Aert said. "But even without him, we have a strong Belgian selection. I don't think we should look at the rest. We should rely on our own strength."