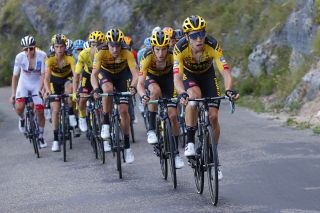 Jumbo-Visma super-domestique and sprinter Wout van Aert has undoubtedly been one of the stars of the 2020 Tour de France, taking stage victories in Privas and Lavaur while working for team and race leader Primož Roglič in the high mountains.

On stage 15, the Belgian was in control of the GC group for the first 9km of the HC-rated summit finish of the Grand Colombier as Egan Bernal (Ineos Grenadiers) and Nairo Quintana (Arkéa-Samsic) dropped away.

The performance, which ended with him finishing alongside Bernal, prompted disgraced ex-team manager Johan Bruyneel to compare Van Aert to five-time Tour winner Bernard Hinault and wonder whether he could one day be a Grand Tour contender himself.

"I only know one rider – Bernard Hinault – who in recent decades was able to dictate the pace on a final climb, and also win mass sprints in the same race," Bruyneel, who directed Alberto Contador, Paolo Savoldelli and Roberto Heras to six Grand Tour wins during his career, told Wielerflits.

"I hardly dare say it, but in my opinion Wout van Aert has everything to become a potential Grand Tour winner. If he goes to a Grand Tour with specific preparation and doesn't lose any strength with mass sprints, he can compete for the podium. I am convinced of that."

Van Aert was unconvinced, however, when the idea was put to him in an interview with Het Laatste Nieuws on Monday evening. The 26-year-old said that his level is high but noted that he 'lets go' during stages, a luxury that GC leaders cannot afford.

"It's certainly not on my list of priorities," he said. "To win a Grand Tour you have to perform at the highest level for three weeks. In other words, even higher than how I'm performing now. Now, I can let go at some point in the ride, and at that moment I'm completely finished. If I were to go for a victory I'd really have to participate until the very end.

"I have other ambitions I want to pursue first. If I retrain myself to become great prodigy I'd go to a point of no return – my body will change, I'd lose kilos and lose all my qualities to win Classics and sprints. I don't want that."

Still, he's 26th overall now, albeit over an hour down. Sitting alongside his teammate, climber George Bennett, and the likes of Esteban Chaves (Mitchelton-Scott) is something few would have expected from him after 16 days of racing.

"The legs are turning well," he said. "I don't feel any downturn for the time being. There will be some fatigue and I feel that, even though I continue to feel very good. That's why I've come out better in the first mountain stages. The atmosphere in the team is very good when you go for the yellow jersey, and that also gives a lot of confidence."

He continues to fight for Roglič's yellow jersey, riding on the front of the GC group at the end of stage 16 to Villard-de-Lans, and should make another super-domestique appearance on Wednesday's summit finish of the Col de la Loze.

Last week, Roglič was questioned about his credibility and whether viewers can have confidence in Jumbo-Visma's performances at the Tour. He responded with an emphatic yes, something that Van Aert echoed.

"It shows a lack of respect, I think. It's very bad that this question keeps coming back," he said. "Primož was third in the Giro last year, and he won the Vuelta – he hasn't come from nowhere and I haven't either. I have also been sufficiently tested in this Tour."

Roglič could face five more tests over the remainder of the Tour, should he keep yellow to Paris. The biggest tests on the road include the Col de la Loze and the stage 20 time trial, while Van Aert could have a chance to go for victory number three on the Champs-Élysées.

Afterwards, a two-week rest would've been on the cards for Van Aert, but the World Championships in Imola – which start just four days after the Tour – have seen to that. He'll be there, leading Belgian in both the road race and time trial, with ambitions to take the rainbow jersey.

"My ambition is to win. I'm currently in very good shape, and I don't go there just to ride. I'm going to take my chances. I have a golden condition and I'll come out of the Tour with a lot of climbing kilometres in my legs.

"I don't know if it will be a World Championships for the real climbers. I think more of Marc Hirschi or Julian Alaphilippe as big favourites, and Alejandro Valverde or Tadej Pogačar, of course. They're all at the top of the Tour rankings and are automatically in shape."

The time trial is a goal too, a short effort that Van Aert says he's used to from cyclo-cross, though freshness might be an issue against Filippo Ganna and Rohan Dennis, who raced Tirreno-Adriatico. Then it'll be off to the Classics, more races he wants to win, and the end of what he hopes will be a stunning – if unexpected before the season's rescheduling – late-year peak.

"The Worlds are now part of that [planned break]. We haven't yet looked at how we'll do it with the team, but of course I'll race for victory in the Classics. I just have to keep it up for another two or three weeks. If I keep recovering like this, I have to do it."