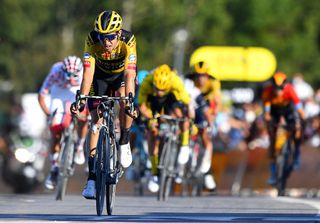 The Milan-San Remo winner had swung off after setting a brisk tempo on behalf of maillot jaune Primož Roglič much of the way up the hors-catégorie Montée du Plateau des Glières, but he chased back on over the other side to offer further assistance in the finale.

The Ineos duo of Michal Kwiatkowski and Richard Carapaz survived from the early break to claim stage victory, leaving four bonus seconds on offer for the first man home from the yellow jersey group.

Jumbo-Visma were keen to ensure that Tadej Pogačar didn’t eat into Roglič’s 57-second overall lead, and so Van Aert was dispatched to win the sprint for third and deny the youngster the time bonus.

“I was completely screwed up, but I still had to sprint to get some bonus seconds,” Van Aert told Sporza afterwards, although he acknowledged that the GC men in a Grand Tour are not usually blessed with rapid finishing speed. “I've done more difficult sprints before.”

As it turned out, Roglič had the wherewithal to finish ahead of Pogačar and take fourth in the dash for the line, although both men came home two seconds down on the flying Van Aert.

Tom Dumoulin had served as a makeshift lead-out man for Van Aert and he explained that the Belgian offered the best guarantee of denying Pogačar the bonus seconds. “Primož is pretty fast but it was safer to go for Wout,” Dumoulin said.

Van Aert’s sprint came after he had worked on the front of the yellow jersey group on the Plateau des Glières, where he helped to ensure attacker Mikel Landa’s advantage never exceeded 30 seconds.

“It was very difficult again,” Van Aert told Sporza. "When they attacked at the top of the last climb, I was finished, but I had to keep riding to help Primož in the final.”

Already winner of two stages on the Tour, in sprints at Privas and Lavaur in week one, Van Aert appears to have the form to win on any of the three remaining days, including the time trial to La Planche des Belles Filles on Saturday, though he played down his prospects.

“I don't feel like thinking about the next few days yet,” said Van Aert, who will line out as the favourite for the road race at the World Championships in Imola, Italy, on September 27 and he will also be a contender in the time trial.

“Tomorrow we will see what there is left to gather. The World Championships are scheduled for next week and I want to do well there, too. The biggest mistake you can make is wanting everything.”

Since the season resumed in August after the hiatus due to the coronavirus pandemic, however, Van Aert has been able to do just about everything. He won Strade Bianche, Milan-San Remo and a stage of the Critérium du Dauphiné before the Tour, while his performances in the mountains in support of Roglic suggest that the three-time cyclo-cross world champion could develop still further in the years ahead.

Asked if he could win a mountain stage of the Tour in the future, Van Aert was guarded: “Maybe.”