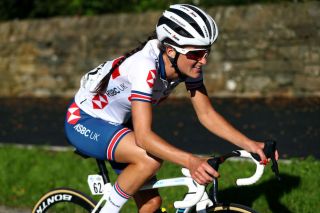 Great Britain's Lizzie Deignan finished 31st in the elite women's road race at the World Championships on Saturday. But, despite being disappointed not to have been able to get a better a result, the 2015 world champion told reporters after the race that the experience in front of a home Yorkshire crowd would be something "that I'll remember for the rest of my life".

"I gave it my all," the 30-year-old said. "I'm disappointed, but I think, practically, I let myself down. Physically, I was pretty good, but I missed the most important move of the day."

Despite that, Deignan said that she never gave up during the 149.5km race.

"I didn't re-adjust and aim for the silver medal; I was always going for the race," she admitted, with eventual winner Annemiek van Vleuten having made her move with over 100km still to go.

"The group I was with clearly had readjusted, and were thinking about going for silver and bronze. When Chloe [Dygert Owen, fourth place] went, I was just off that move as I'd been on the front too long. Stupid, you know – a tactical error," Deignan said. "But I'm proud of the way I raced and the physical shape I got myself into to be here today. It's not that I lost the race because of a tactic. Annemiek was head and shoulders above everyone else.

"I knew she would be impossible to hang onto there [where she attacked]," she continued. "I knew she was about to go, and I closed the door a couple of times. I delayed her attack as long as I could, but I knew it was an inevitability."

Did she think Van Vleuten's attack was from too far out, and too ambitious?

"On paper, yes, but she proved otherwise, didn't she?" said Deignan.

"It was a long old slog out there. Chapeau to the winner; Annemiek deserved that title. She smashed everybody. But a big shout-out to my British Cycling team, as the girls gave superb performance. Anna Henderson [GB's highest finisher, 22nd place], in particular, had a phenomenal ride," she said.

Deignan has possibly ridden her last World Championships, having told Cyclingnews last month that her plan is to retire after the Olympic Games road race in Tokyo next July.

"I said beforehand I'll remember this day for the rest of my career, and I will. I didn't win, but it's been a phenomenal day," she said, with the course having passed by her childhood home in Otley.

"I'm so proud of what I've been able to achieve this year," added Deignan. "Nobody knows, apart from me and my husband, the work that's gone into this. Physically, I'm proud of the shape I got myself in to be here, and I'm more motivated than ever and enjoying myself more than ever, so I'm happy.

"It was incredible," she said of the noise and support she got from the roadside. "It was a bit reminiscent of the London Olympic Games again, and I'm hugely grateful to everyone that's supported us.

"Honestly, that will be a race that I'll remember for the rest of my life. I feel so privileged to have been part of the team."