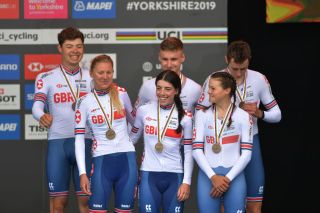 Lauren Dolan, who was part of Great Britain's bronze-medal-winning squad in the mixed relay team time trial at the Yorkshire World Championships on Sunday, has been injured in a crash in her home county of Devon, in the UK, a local website has reported.

According to devonlive.com, Dolan's accident happened around Tuesday lunchtime – less than 48 hours after the 20-year-old's bronze-medal-winning ride – between Teignmouth and Dawlish, leaving her with "collarbone and shoulder injuries", with police appealing for witnesses.

"After initial treatment at Torbay Hospital, Dolan has been taken by her father and coach Mark to the GB [cycling] medical centre in Manchester for further assessment and possible surgery," read the report on Wednesday.

Dolan – from Bickington, near Newton Abbot – rode the second, 14km leg of the mixed relay team time trial format at the Worlds with Anna Henderson and Joscelin Lowdon, following the first leg ridden by the GB trio of Dan Bigham, Harry Tanfield and John Archibald. She helped give the team an early lead in the competition, but they were later bettered first by Germany and then the event winners from the Netherlands, but were happy to take what was somewhat of a surprise third place.