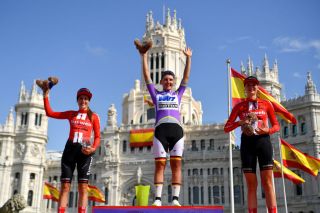 The Madrid Challenge by La Vuelta women's race has been extended by a day to three days and will bring the curtain down the postponed 15-race women's WorldTour calendar on November 8, the same day the men's Vuelta a España ends in Madrid.

The city of Madrid and the surrounding autonomous community have hosted every edition of the race since its creation in 2015. It started as a circuit race in Madrid, with a time trial in Boadilla del Monte added in 2018.

Race organiser Unipublic confirmed hard material solutions company Ceratizit as title sponsor and revealed the race will extend outside Madrid. Ceratizit is a title sponsor of the Ceratizit-WNT Pro Cycling team that includes Kirsten Wild and Lisa Brennauer on its roster.

Brennauer won the time trial stage in 2019 to set up overall victory in Madrid.

Ramiro Bengochea, the General Director of Ceratizit Ibérica said that the sponsorship is "the next logical step for a race that has experienced consistent growth."

"We have been supporting women’s cycling for years. It would make no sense not to make this extra effort now, when the discipline needs us most."

With the full dates of the revised race calendar's now confirmed by the UCI, Unipublic is now working on designing the race itinerary, which will be revealed in the coming weeks.

"This health crisis has affected cycling at every level: men’s, women’s and grassroots cycling alike. With that in mind, we feel it is our responsibility and our obligation to do what we can to help the sport that has given us so much. We believe in this race and we wish to continue to grow together," Javier Guillén, General Director of Unipublic said.

The growth of Challenge by La Vuelta is another small sign of an increasing commitment to women's cycling from Vuelta owner ASO, which also organises the Tour de France.

ASO has hinted it could finally organise a women’s Tour de France in 2022. When the new WorldTour calendars were revealed, they confirmed the creation of the first-ever women’s Paris-Roubaix for October 25.

The COVID-19 coronavirus pandemic has hit the women’s calendar particularly hard, with 14 of the top-tier 22-event Women's WorldTour races initially being either cancelled or postponed. The UCI has suspended racing for WorldTour men's and women's events until August 1.

The majority of the major races were salvaged in the late-season calendar, with the exception of three events which opted to cancel: Ronde van Drenthe, Trofeo Alfredo Binda-Cittiglio and Women’s Tour in Britain.

The published revised UCI Women’s WorldTour calendar will start on August 1 with the Strade Bianche and finish on November 8 with the Ceratizit Madrid Challenge by La Vuelta.

The WorldTour series will include 18 events that include five stage races, including a shortened Giro Rosa (September 11-19). There will also be 13 one-day races including La Course (August 29), the three Ardennes Classics - Flèche Wallonne (September 30), Liège-Bastogne-Liège (October 4) and Amstel Gold Race (October 10) - along with Tour of Flanders (October 18), and the new Paris-Roubaix (October 25). A few other races completes the 2020 women's road race calendar.