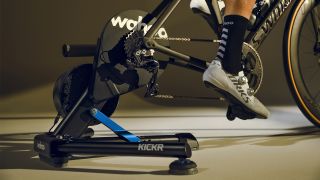 Wahoo has today announced the launch of its all-new Kickr, a direct-drive smart turbo trainer to replace the popular Kickr18. The new model is more a case of evolution rather than revolution, but with it comes a selection of interesting improvements over the 2018 model it replaces, as Wahoo looks to edge itself back to the front of the best turbo trainers race.

The most noticeable change for the Kickr20 is the five degrees of side-to-side movement it has been given, courtesy of its new cushioned feet known as AXIS, which are added as Wahoo looks to further mimic the outdoor riding experience. The maximum resistance remains at 2,200 watts, but Wahoo claims the measurement of this power sees an improvement, now accurate to within just one per cent, down from the two per cent offered on the previous model. And thirdly, perhaps the thing that owners will come to appreciate the most is the introduction of automatic calibration, meaning owners can finally say goodbye to the pre-ride spin down.

The outgoing Kickr18 is a popular choice among indoor cycling enthusiasts and received a score of 4.5/5 stars in our recent Wahoo Kickr review. With its latest improvements, it seems safe to assume the Kickr20 will be a shoo-in to our guide to the best turbo trainers. With this tried, tested, and clearly successful construction, much of the rest of the Kickr20 remains unchanged from its predecessor. Foregoing the new magnetic resistance unit introduced with the Kickr bike, the Kickr20 uses the same 16lb flywheel as the outgoing model, along with the same maximum resistance of 2,200 watts. Additionally, Wahoo claims the 'virtually silent' operation is also unchanged - as measured at approximately 60dB in our recent Wahoo Kickr review.

Another thing that remains unchanged is the price, which will be music to the ears of Wahooligans the world over. The Kickr has never been a cheap option, and until the introduction of the Kickr Bike, it sat atop Wahoo's turbo trainer range, but thankfully the update doesn't come with a price hike.

The aesthetic of the new model also remains largely identical to the outgoing model, mainly because they share the same fold out legs, carry handle and black-and-blue colourway. In fact, the only visible difference between the two is the updated AXIS feet. According to Wahoo, these are customizable cushioned feet that respond to movements from changes in tempo and body position. They are claimed to mimic the side to side movement experienced when riding outdoors. For owners of any of the four previous-generation Kickr models, the Kickr AXIS feet are backwards compatible and sold separately.