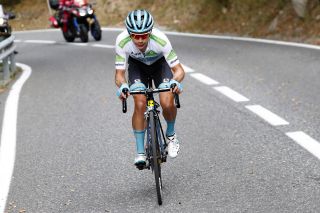 Miguel Angel López’s bloodied arms and muddied kit told their own story when he crossed the line at Cortals d’Encamp at the finish of stage 9 of the Vuelta a España.

The Astana rider had been on the attack, half a minute clear of his direct rivals, when a ferocious hailstorm interrupted live television pictures in the final 10 kilometres. By the time coverage resumed, he had been caught and passed by those same rivals after falling victim to a crash on the gravel sector that preceded the haul to the finish.

“With about a kilometre and a half left on the gravel sector, I came in very fast into a corner,” López said. “My bike slid out and I fell to the ground. I’m a bit cut up, but I was able continue. It could have been a lot worse.”

Lopez finished the stage in 9th place, 1:01 down on solo winner Tadej Pogacar (UAE Team Emirates), he conceded ground, too, to Primoz Roglic (Jumbo-Visma) and the Movistar duo of Alejandro Valverde and Nairo Quintana. He reaches the Vuelta’s first rest day in 4th place overall, 20 seconds behind the new overall leader, his fellow Colombian Quintana.

When Lopez bounded clear on the Alto de la Comella with 20km remaining, of course, it initially looked as though he was destined to take possession of the maillot rojo for the fourth time on this Vuelta. The second of his bracing accelerations there carried him clear of Roglic, Valverde and Quintana, and he set off in lone pursuit of the remnants of the early break.

On the following Alto de Engolasters, Astana teammates Gorka Izagirre and Jakob Fuglsang dropped back in turn to help pace Lopez and his buffer yawned out to 40 seconds as leaden drops of rain began to fall. They soon turned to hailstones and the most demanding stage of the Vuelta to this point suddenly took on an even more arduous guise.

A section of unmade road linked the top of the Engolasters to the base of the day’s final ascent, and Lopez’s offensive ground to a halt when his wheels slid from beneath him. It was the latest bout of ill fortune in a career has been punctuated by crashes, from the serious training accident that left him with a broken tibia, to the absurd collision with a fan on this year’s Giro d’Italia.

“Fortunately, I didn’t get any serious injury, but I lost time and my rivals came across to me,” Lopez said. “I continued working hard, trying to stay in that group, but gravel and mud damaged my bike, while there was no place to change it. All I could do was just try to stay with them as long as possible. At the end of the day I lost some seconds – not too much, but, of course, we had another plan.”

Lopez remains in the white jersey of best young rider and, despite his travails, he wore a broad smile as he took a seat in the mixed zone following the stage. He nodded when asked if he though the commissaires might have called a halt to the stage when the hailstorm swept across the peaks of Andorra.

“I don’t know; I think so. My arms still look as though they’ve been shot,” Lopez said. “It was dangerous, but at least the storm didn’t hit us on the descent. There was a lot of hail and the bike was sliding, but I got through it.”