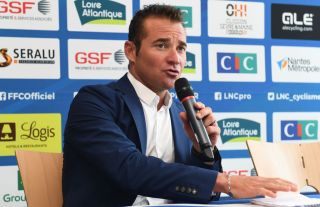 French men's national team coach Thomas Voeckler will face an uphill battle almost as tough as the one faced by the riders during the hilly Olympic Games road race next year when the former rider will have just a week to attempt to unite the nation's best for the Tokyo event following the 2021 Tour de France.

His task is perhaps no greater than the other nations who will also have just six days between the end of next year's Tour in Paris on July 18 and the Olympic road race. But with a team that could include Thibaut Pinot, Julian Alaphilippe, Romain Bardet and Warren Barguil, France will be one of the favourites for the road race in Japan on July 24, and it's that combination of captains that are rivals for the rest of the season that concerns Voeckler.

Despite the challenges he faces in uniting his riders on the national team, it's one that he's already going to have to deal with this season, with just a week between the finish of the Tour de France on September 20 and the World Championship road race on September 27.

Besides, the alternative for next year didn't really bear thinking about: the 2021 Tour was due to finish on July 25 – the day after the Olympic road race – and so Voeckler's grateful that the ASO and the UCI have made steps to move the Tour forward so that it starts on June 26 and ends on July 18 next year. Brittany is now a possible alternative Grand Départ venue to Denmark, which was looking unable to change the original dates due to a clash with football matches being hosted in Copenhagen in late June as part of the rescheduled Euro 2020 tournament.

"Having only a week between the end of the Tour and the Olympic road race doesn't really bother me," Voeckler told L'Equipe this week. "Perhaps some riders might struggle, but we know that a guy like Thibaut Pinot will be able to ride a good Tour and then still perform on the following Sunday.

"The more problematic aspect, in my opinion, is that it will be more difficult to build real team spirit within the space of a week," Voeckler admitted. "Those riders who find themselves as part of the national team for the Games will normally be adversaries for the rest of the year.

"Two months gives you time to take a step back, to correct any possible tensions," he said, referring to the usual period of time between the end of the Tour and the World Championships road race each year, "but just a week after the Tour, the rivalry will still be fresh, and so it'll be more complicated when it comes to everyone working 100 per cent as a collective."

For now, Voeckler said, he's happy to let things take their course, while this year's hilly road race course at the World Championships in Switzerland, just a week after the finish of this year's rescheduled Tour, could serve as somewhat of a dress rehearsal for next year.

He also more than hinted that some changes are afoot ahead of next year, and they most likely involve Bardet, who is rumoured to be leaving AG2R La Mondiale for pastures new, and could be eyeing Sunweb as a possible new home.

"Some riders are in the process of changing teams, but all of them are focused on the second half of this 'new' season," he said, "and so this particular period has taught me to take a step back and not cause any fuss."

First will come this year's Worlds road race, and Voeckler has been thinking hard about his possible selections.

"Of course, we have the headliners who stand out," he said, naming Pinot, Bardet and Alaphilippe. "But it's been such a special year that I want to wait and see what their fitness levels are like.

"I'm also waiting to see if a rider like David Gaudu [Groupama-FDJ] can reach the level of the other three by then. Plus we're not going to have a team made up only of leaders. What will count most is team spirit."