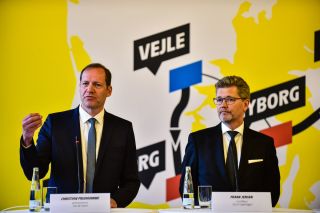 The Tour de France start in Denmark will most likely be moved from 2021 to 2022, DR.dk reports. The postponement could satisfy a contract between Tour organisers Amaury Sport Organisation and the city of Copenhagen, clearing the way for the dates of the Tour to be held a week earlier and avoid conflict with the Tokyo Olympic Games men's road race.

Frank Jesper, the mayor of Copenhagen, confirmed that he is in negotiations to postpone the planned three stages to 2022 and denied the country would lose the race altogether.

"There is no question that the Tour will not come to Denmark and Copenhagen," Jesper said according to DR.dk.

"It is most likely that the Tour start in Denmark will be moved to 2022. We are trying to make it happen in 2021, but if we stick to 2021, it will be very squeezed. It will give better exposure to the race in Denmark if you wait a year and do not force the Tour start through next year."

The first three stages of the 2021 Tour de France were originally due to take place in Denmark July 2-4, 2021 but after the coronavirus pandemic forced the postponement of the Olympics, the men's road race fell during the final weekend of the original dates.

The ASO had hoped to move the Tour de France to start one week earlier to avoid the overlap but Copenhagen is hosting matches for the European football championships in the last week of June and hosting both major events in the same week would be a strain on the region's resources.

Reports from the Breton newspaper Le Télégramme already have hinted that Brittany has been offered next year's Grand Depart, pushing up their plans by several years.

The probable move of the Copenhagen stages surprised Erik Lauritzen, the mayor of Sønderborg - where the third stage was due to finish. He told Ekstra Bladet his office had not been informed of the negotiations.

"I respect the fact that it was a very difficult situation from ASO and the French, but we should have been informed that we were now looking at an alternative," Lauritzen said.

But he agreed that the postponement is probably for the best.

"It would be a very big challenge all the way around, and that's why I'm also thinking it might be the best solution for everyone to postpone it for a year and then be sure we're outside the corona limitations and other uncertainties."