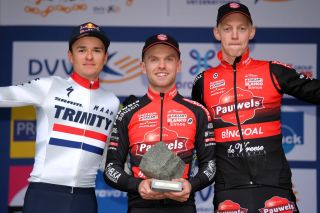 Pauwels Sauzen-Bingoal teammates Eli Iserbyt and Michael Vanthourenhout have both made moves to brush aside their altercation at round 3 of the DVV Trofee in Kortrijk on Saturday, where Vanthourenhout expressed his frustration at his teammate having chased him down.

With three laps to go at the new Urban Cross round of the Belgian cyclo-cross series, and with Mathieu van der Poel (Corendon-Circus) having attacked solo en route to the victory, lone chaser Vanthourenhout was doing his best to close, or at least limit, the gap to the world champion.

However, behind him, series leader Iserbyt was heading a chase group that also included Tim Merlier (Creafin-Fristads) and Telenet Baloise Lions' Toon Aerts and Lars van der Haar, and when they again caught up with Vanthourenhout, he could be seen gesticulating wildly at his teammate, suggesting that he was upset that Iserbyt had led the chase back up to him as he in turn had tried to chase Van der Poel.

Iserbyt defended his ride on Saturday evening, telling HLN.be that, as the series' overall leader, he was trying to limit his losses to Van der Poel in a competition with an overall classification decided on total rider times, rather than points.

"To be honest, I have no idea why Michael reacted so bitterly," Iserbyt told the Belgian website. "I saw Mathieu riding away fairly easily, and I made an attempt to follow him, which didn't work because I wasn't good enough.

"But as the leader of the DVV Trofee, I did have the right to try, I think," he said. "In such a fast race, I didn't think that Michael had enough of a gap to stay ahead. I was just defending my leadership position, and I think I did well."

The website also suggested that the two riders had already had some kind of altercation at round 4 of the World Cup in Tabor, in the Czech Republic, two weeks ago.

"In a team with three leaders, it's not easy to determine the hierarchy," Iserbyt added, referring to him, Vanthourenhout and Laurens Sweeck at Pauwels Sauzen-Bingoal. "It's up to the team management to make a choice and to indicate the leader. The fact remains that I'm the leader of the World Cup and the DVV Trofee, and am therefore by definition leading the team."

Vanthourenhout, meanwhile, wrote in a tweet on Saturday that he had been frustrated by Iserbyt closing the gap to him, but admitted that he'd overreacted, and that the two of them had already put the matter behind them.

Such is Van der Poel's dominance of the cyclo-cross scene that he has extended his winning streak to 34 races in a row, with very little sign of that dominance ending any time soon, although his previous closest rival, three-time elite world champion Wout van Aert (Jumbo-Visma), has announced his return to the discipline at the Azencross round of the DVV Trofee in Loenhout on December 27.

However, while Van Aert's still recovering from the injury sustained in a crash at the Tour de France, it remains to be seen whether the Belgian will be capable of mounting any kind of serious challenge to the Dutchman before the end of the 2019/20 cyclo-cross season.