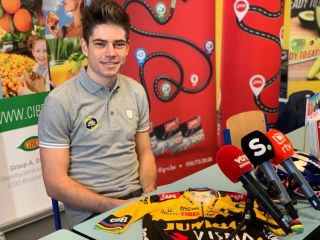 Wout van Aert will return to racing on December 27 at the Azencross cyclo-cross race in Loenhout (Image credit: JUmbo-Visma)

Wout van Aert has confirmed he will ride the Azencross cyclo-cross race in Loenhout, Belgium, on December 27, with the DVV Trofee series event marking his first race since his crash at the Tour de France, where he damaged his thigh and hip muscles. Van Aert will use a series of cyclo-cross races to rebuild his strength and fitness before the 2020 road race season with Jumbo-Visma.

Speaking at a press conference on Saturday morning, Van Aert also revealed his special Jumbo-Visma colours, with Cibel-Cebon, Caps and Domo backing his cyclo-cross campaign. They supported Van Aert when he unilaterally broke his contract with Verandas Willems-Crelan last winter and have agreed to back Van Aert for the next two cyclo-cross seasons.

"If the recovery continues as it is now, I will make my comeback in Loenhout on 27 December 27. My rehabilitation has progressed much faster this past month, and I can now train and increase the load," Van Aert confirmed.

"There's still work to be done, because at the moment I've had some reaction after my training. Yet we think it's realistic to make my return within a month, although that will certainly not be in top shape."

Van Aert crashed out of the Tour during the stage 13 individual time trial in Pau after clipping a crowd barrier, which resulted in a serious thigh injury, requiring surgery and two months off his bike.

The 25-year-old has been riding again since September, missing riding with gym and rehabilitation work. Riding some cyclo-cross races had always been a goal during his recovery but Van Aert had recently become more cautious about his return in recent week. However he has increased his training load in recent weeks and even did some bike testing on the cobbles of Paris-Roubaix with several teammates this week, clocking up 83km.

"Yesterday (Friday) I rode 125km without any major problems but cross-country riding is more than just cycling. On and off the bike requires a lot more from my hip. We are still working on improving that. The intention is that if I make my return, it is not a step back in my recovery," he said, while keeping expectations low for the 2020 season.

It would be stupid to talk about results now. I have not been on a bicycle for three months and I am working hard on a long way back. I am already happy to be able to contest crosses. I'm just happy to be a rider again."

"We've already thought about my (road racing) program, but it is still too early to make any statements about it. I really have to be physically ready but were optimistic about that."

In the next two weeks, Van Aert will head to Spain for a training camp.

Earlier this week, Van Aert won a work-tribunal court case against the manager of former team Verandas Willems-Crelan, Nick Nuyens, who was seeking €1,110,000 in damages after Van Aert terminated his contract with the Belgian squad ahead of the 2019 season and was allowed to join Jumbo-Visma. He went on to finish third at Strade Bianche, second at the E3 BinckBank Classic. He won the Belgian time trial title and the stage of the Tour de France to Albi in a sprint, three days before his crash in the Pau time trial.

My rehab is in full swing. Proud on what I achieved already & grateful for all the support I had 🙏🏼Credits: @movetocure pic.twitter.com/y2zVUV3puGNovember 14, 2019