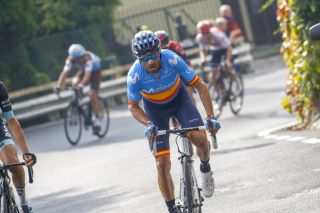 Alejandro Valverde (Movistar) came up just short in his quest to add Il Lombardia to his lengthy palmares, beating Tour de France winner Egan Bernal (Team Ineos) to the line in the sprint in Como but ceding the win to lone escapee Bauke Mollema (Trek-Segafredo).

Mollema escaped on the penultimate climb and then  held off the group of chasing favourites to take the biggest win of his career, while Valverde was able to drop all but Bernal and Jakob Fuglsang (Astana) on his way to second.

"I'm satisfied with this second place, but knowing that I had the legs to win, I'm left with a bittersweet taste,” the 2018 World Champion said.

No birthday gifts for Woods at Il Lombardia

Bernal: Third place at Il Lombardia is a success for me

“There was a lot of everyone looking at each other near the end, and that makes it easier for a solo rider, with less vigilance, to go away and stick at the front until the end. Bauke took advantage to attack, make a big move and use his energy well to succeed. Hats off to him – he's a deserved winner.”

Primoz Roglic went after Mollema with his own solo move, but Valverde and the others were able to pin him back on the final ascent of the San Fermo climb, where Valverde made his own attempt to shed the others.

“I tried to attack again at San Fermo – I had jumped before at Civiglio, but once caught, I didn't want to keep the pace because there was still one tough climb left – and even gave it a try at the summit, but seeing that they were just behind, I waited for them to push together and see if we could gain some time on Bauke,” he said.

Unfortunately for the chasers, they were not able to pull back the Dutchman, who still held a 16 second advantage at the line. Valverder has enough left in his tank to whittle the first chase group down to three and then outkick Bernal and Jakob Fuglsang (Astana) for his second-runner-up result in as many racs after coming second to Michael Woods Wednesday at Milano-Torino.

“Sometimes you win, sometimes you lose, that's cycling,” he said. “ I'll be 40 next year and it'll be hard to aim for a victory again here, but you can see that I'm still here after so, so long, doing even better than in previous seasons, so there might be some room for surprise left."