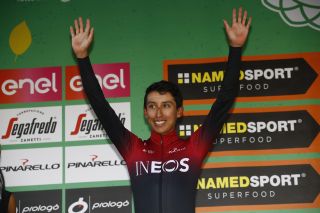 Egan Bernal (Team Ineos) looked disappointed as he stood on the podium after finishing third at Il Lombardia but insisted his first ever result in a monument Classic, a few months after winning the Tour de France, was worth celebrating as he brought the curtain down on his incredible 2019 season.

"Third place at Il Lombardia is a success for me. This morning I didn’t think I'd be on the podium," Bernal said.

"I'm also happy because we raced well as a team. The guys believed in me and rode for me and I managed to get a result. I didn't win, but we have to satisfied."

Bernal's talents are immense, but this was only his third ride in a major Classic. He has only ever ridden Il Lombardia, but as with every aspect of professional racing, he seems to be a fast learner. Like all the big-name favourites, he perhaps regrets letting Mollema go away and gain time on the Civiglio climb, but he then had the courage to dive down the descent to Como chasing a chance of success and a place
on the podium.

Despite being 22 years old, Bernal was not afraid to take on Alejandro Valverde (Movistar) in the sprint for second place.

"Il Lombardia is a big one-day Classic. It's far more unpredictable than a Grand Tour and things happen that mean you don’t win," he pointed out.

"I tried to beat Valverde but he beat me; that's racing. If you don't win and end up third, it doesn't mean you've raced badly, just that things just didn't go our way. Mollema was the strongest and attacked at the right time and then stayed away. He deserved to win."

Bernal opted to race a programme of end-of-season Classics instead of ending his season early. He didn't want to get out of shape and distracted by continuous Tour de France celebrations, knowing it is better to start the 2020 season on form and on the front foot than be under scrutiny and under pressure.

It is perhaps a sign of his talent or a result of his success in 2019, but Bernal is already looking forward to 2020.

"I need to switch off, relax and recover so that I have the motivation for another good season in 2020," he said.

"I'm going to enjoy some holidays, spend time at home with my family, and then think of next season. I'm still hungry and I want do well next season."