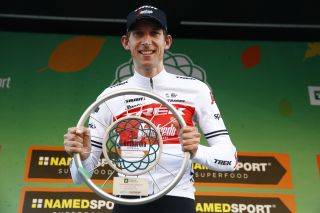 Bauke Mollema continued Trek-Segafredo's incredible end-of-season turnaround with his victory at Il Lombardia on Saturday, gathering the rewards of a long career of hard work, aggressive racing but little success.

Giulio Ciccone wore the yellow jersey for two days at the Tour de France, but Trek-Segafredo had endured a meager 2019 season, winning just eight races, until Mads Pedersen won the rainbow jersey in Yorkshire. Now Mollema has given the US-registered team the final monument of the season, teaching that resilience and hard work is eventually rewarded, especially in such a demanding sport as professional cycling.

"We didn’t have great season, especially in the Classics, but in the last two weeks we've won the world championship with Mads. That made us super happy, but to then to win a monument like Il Lombardia is great way to finish the season," Mollema said.

Bernal: Third place at Il Lombardia is a success for me

"For me, personally, those last two kilometres were very special. I knew I was going to win and then near the finish I saw some of the team going crazy at the side of the road. My parents are also here, so it's all very special," he  said.

Mollema has been a professional since 2008. His palmares includes a stage victory at the 2017 Tour de France and the Clasica San Sebastian in 2016, but also lots of placings due to a lack of a fast sprint finish. Yet he never lost heart or motivation.

"This feels like a reward for my whole career," he said.

"I've not won a lot races but had a lot of top 10s, so this makes this moment even more special. This is my 11th Lombardia. I've always liked it. There are only three other Dutch winners, so it's nice to be up there with the big names of the past.

"I think it was my day today. I felt good in the last few weeks and in the recent Italian races. I've been training really hard and maybe a bit differently, doing more explosive training for the one-day races. It has paid off."

Mollema knew he had to make his move before the final climb, to take the race to the riders who could beat him in a sprint finish.

"My move wasn't really planned, but I knew I couldn't finish in a group or wait for the last climb. I had to try to play for the win and not follow other moves," he explained.

"I think it was the right moment to go, everyone was looking at each other, it was perfect for me. When I get a gap, I don’t explode and can just keep going. That's what I did today. Once I had 20 seconds and was over the top of the Civiglio, everything was a blur but I started to think I could win. I know the descent pretty well, and it
was then just a time trial to the last climb and the finish."

Mollema was part of the Dutch team that recently won the team time trial mixed relay at the UCI Road WorldChampionships. While his rivals chased each other and looked at each other. He went flat out all the way to the finish but was in control of his own destiny.

"The last climb was not super hard, but I started it with at least 25 seconds," he explained rationally.

"I new that Roglic got close, but I saw him when I looked down the hairpins and saw he was far away. That was the moment I knew I could win Il Lombardia."