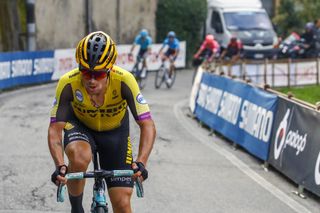 Primoz Rogl;ic tried to chase down Mollema on his own (Image credit: Bettini Photo)

Primoz Roglic (Jumbo-Visma) cracked a rare smile at the finish of Il Lombardia in Como, perhaps enjoying the respect and recognition his rivals showed by racing against him and chasing him down as he tried to go after eventual winner Bauke Mollema.

Roglic started Il Lombardia as a favourite after winning the Giro dell'Emilia and the Tre Valle Varesine in the last week and the Vuelta a Espana last month. His incredible success in 2019 has made him marked man, even for Il Lombardia.

When Roglic attacked on the Civiglio, the others jumped on him. When he set off in pursuit of Mollema on the flat road before the final San Fermo della Battaglia climb, Alejandro Valverde (Movistar) chased him down. He eventually finished seventh, 34 seconds behind Mollema.

"I think they raced to stop me winning," Roglic said of his rivals' tactics, as he tried to ride through the chaos of the finish area and disappear onto the Jumbo-Visma bus.

"I tried, but I suppose it's always like that now. It's something new for me, but it's all experience for the future."

Roglic was also smiling because he had banished the ghosts of his comedy of errors when the Giro d'Italia visited Como in May.

Then, his Jumbo-Visma team had stopped for a natural break when he needed a bike change, he crashed hard on the descent of the Civiglio climb while riding a teammates bike and lost a precious 40 seconds. All was forgotten after his successful season. This time he finished seventh on the edge of Lake Como, enough to end the season as the world's number-one ranked rider, while his rivals could only fight for
the minor placings.

"I enjoyed finishing in Como this time," Roglic said, flashing an ironic smile. "t was the best Classics race I ever did so far. Now I'm also looking forward to the day I win here in Como."

Roglic praised Mollema on his victory, admitting that the others made a mistake by watching each other and not working together to chase the Dutchman.

"As the saying goes: If two dogs fight for a bone, a third gets to take it away. The big guys kept looking at me but Bauke was the best and won it well. I have to compliment the team, they were strong, but I didn't expect anything else.

"I'm looking forward to the winter but also the next races," Roglic said. "I think it was quite a nice season, so I think I can enjoy the off-season and look to the future. It was my most successful season to date. Last week I also showed that I compete in one-day races too. I'm most of all happy that I finishing the season as number one in the world."