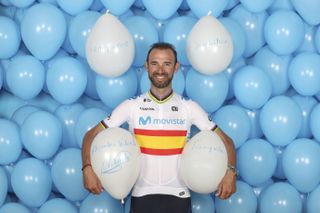 Alejandro Valverde has confirmed that he will call time on his career at the end of the 2021 season, by which time he'll have turned 41 years of age. Speaking ahead of the Volta a la Comunitat Valenciana, which starts on Wednesday, the Movistar veteran added that he plans to stay with the team after he stops racing.

In the past, Valverde has hinted that he would stop after the Tokyo Olympics later this year, though last year he said that "in principle" he'd retire in 2021. Last June, he extended his contract to the end of next season, and his latest comments seem to confirm his future plans.

"That and no more," he told AS when asked about 2021. "I want to do two seasons at the highest level and leave. Entering the Movistar organisation after hanging up the bike also makes me very excited. I want to contribute to this family from any position."

Valverde has three race days under his belt so far this season, taking in the first three days of Challenge Mallorca. He took second place behind Emanuel Buchmann (Bora-Hansgrohe) at the Trofeo Serra de Tramuntana and will be aiming for his first win of 2020 in Valencia, a race he's won three times in the past, taking four stages along the way.

Last season, though, saw the 39-year-old take only five wins, down from 14 the previous year. A Vuelta a España stage on the steep slopes of Mas de la Costa and the Spanish national road race title were highlights, though there are signs of a slowdown as he nears the end of his career.

"This season [age] affects me a little, but in the end it's just a number because the dream of cycling remains intact," he said. "Of course, I must also be realistic and know that time is passing, that I accumulate a lot of wear and tear because of age and always fighting in races. If I didn't feel at my best with the option of competing and aiming for more victories I would have stopped by now.

"It will be very hard," he said about the prospect of not being able to fight for wins in future. "Although it's a law of life and normal to be beaten by people of 35 or 25, it's hard to accept it and adapt to being beaten in competitions where you usually perform well because of your condition. But what can we do?"

Despite the prospect of a natural decline in ability as the years wear on, Valverde is hoping for at least one more big victory before hanging up his Canyon. During his 18-year career, temporarily halted by a two-year doping ban in 2010, he has won almost every major event on the calendar.

In 2018 he added the rainbow stripes to a palmarès that includes the 2009 Vuelta, nine Ardennes classics including four Liège-Bastogne-Liège wins, six WorldTour stage races and 18 Grand Tour stages, among others. The Olympic Games, where his best placing has been 12th in Beijing 2008, is his final challenge.

"I'm missing that medal on my résumé. I've got stages and podiums at the three Grand Tours, the Classics, the World Championships. It would be the cherry on top of my fifth Olympics participation."

With the road race coming just a week after the end of the Tour de France (in Rio it was two weeks), there's a balance to be struck.

Some riders, including Vincenzo Nibali and Simon Yates, have opted for the Giro d'Italia over the Tour, but Valverde is committed to France, even if he doesn't know whether he'll ride on until Paris – he has previously said that abandoning early is the plan.

"Once there, it will be hard to decide. The Tour is the Tour – it must be honoured. If I intend to perform close to 100 per cent in Tokyo then surely it would be best to withdraw early, rest a bit, train and acclimatise. God will say you don't go to the Tour anyway."

This year's Tour will be Valverde's 13th participation in the race. There, he'll play something of a co-mentor as well co-leader role to his younger teammates Marc Soler and Enric Mas, who have a combined three Tour starts under their belt.

With Mas new to the team and Soler stepping up to a leadership role, it's all change at the squad this season, with 14 new faces incoming as Nairo Quintana, Richard Carapaz and Mikel Landa left.

"Movistar had to make changes after a couple of years in which we achieved good results, although sometimes we didn't work as well as we wanted to," Valverde said. "14 riders joined us; they bring us innovations. Patxi Vila joined the technical staff. When you make transitions like this, you have to take it on naturally and with good predisposition.

"I feel happy, wanting to help Enric and Marc grow. They're two young boys with room for improvement who have shown beautiful things. I am still among those who takes responsibility and makes demands of myself, which motivates me.

"They too will be asked to take a little step forward, and I won't mind sacrificing myself for the good of the group. In the end, I've enjoyed a fairly good record, and it's all about Movistar winning."

The frictions that sometimes rose to the surface when Valverde led alongside Quintana and Landa might be gone then, but Valverde said that the dynamic was natural in such a high-pressure environment. Though whether the tensions will return among the new leadership group is yet to be seen.

"Who doesn't argue in a co-existence when you're looking to win and are involved in competitive tension? We were several captains – of course we got angry and we got over it.

"For my part, I'm grateful to share the jersey with two excellent cyclists; I hope they do well. But not so much if their goals coincide with mine," Valverde concluded, jokingly.