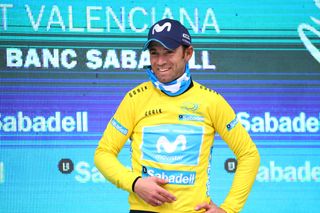 Alejandro Valverde on the podium as the winner of the 2018 Volta a la Communitat Valenciana (Image credit: Getty Images)

The same as it ever was. Although Alejandro Valverde's 40th birthday beckons this April, if there's an early-season middle-ranking stage race in Spain and Movistar are taking part, then Alejandro el Bala is the man to beat. So, the 2020 Volta a la Comunitat Valenciana is going to be no different.

Over the past 20 years, Valverde and Valencia have grown to share much more than their first three letters. Back in 2004, after a scant first two years as a pro, Valverde won the overall title, then he did so again in 2007 and – after his ban and after Valencia’s own suspension and revival – in 2018, making him the all-time record holder of victories in the five-day race.

Last year wasn't a vintage Valverde season in terms of wins, but Valencia was  nonetheless one of Valverde's multiple near misses, as he placed second overall behind Ion Izagirre (Astana). That means that, in four participations, Valverde's worst result has been runner-up.

In 2020, with no individual time trial like in 2019, and two of those punchy or brutally steep summit finishes where Valverde has always shone, the route plays in his favour as well.

Furthermore, his early results suggest strong form, given at the Challenge Mallorca he finished second on the toughest single day of racing. Teammate Marc Soler, who won the third day in Mallorca, represents another option for the Movistar team but, for now, it’s hard to see past Valverde.

A wealth of star names

That said, the Valencia line-up this year is a formidable one, despite it overlapping with no fewer than five early-season events, old and new: the Herald SunTour in Australia, the French traditional stage race season opener Étoile de Bessèges, the Tour de Langkawi in the Far East, and the first-ever editions of the Saudi Tour and Tel Aviv Classic.

Whilst the participation in other early-season Spanish stage races has wilted in the heat of such broad-based opposition, Valencia appears to be building on its already considerable prestige. Promoted from the 2.1 category to form part of the  new ProSeries, the number of WorldTour teams in Valencia has increased from 11 in 2019 to 13 this year.

Even if 2018 Tour de France champion Geraint Thomas (Team Ineos) has opted to skip the race this year, there's still a considerable array of star names set to roll out of the northerly town of Castellón on Wednesday morning.

In February, the caveat on any competition is that many of the top riders will still be a long way off their top form, but the degree of unpredictability being so much greater is arguably one of the big appeals. On paper, though, defending champion Ion Izagirre (Astana), who narrowly defeated Valverde last year, is one of several top GC contenders, along with the Basque’s teammate Luis León Sánchez.

There are plenty of star names showing off their team colours for the first time, too, amongst them Tom Dumoulin (Jumbo-Visma), back in competition for the first time since last June, Philippe Gilbert (Lotto-Soudal), Matteo Trentin (CCC Team) and former overall winner Wout Poels (Bahrain-Merida).

With three opportunities to shine, on stages 1, 3, and 5, it’s no surprise that the list of sprinters is a respectable one. Trentin was a stage winner in Valencia last year, as was Dylan Groenewegen (Lotto-Jumbo), and this year riders like Fabio Jakobsen (Deceuninck-Quick Step) and Alexander Kristoff (UAE Team Emirates) are also leading contenders.

It remains to be seen whether Luka Mezgec (Mitchelton-Scott), back after a long lay-off following his Vuelta a España high-speed crash, can continue his winning ways of the first two thirds of 2019.

It has to be said that Valencia's route is not so appealingly varied as in 2019. Last year's short and technically challenging opening time trial has been dropped in favour of a rather more predictable stage through the hills and flatlands of northern Valencia, likely to end in a bunch sprint.

Rather than last year's TT ascent to the seminary of Orihuela, a short, punchy uphill finish to the Cullera radar station on stage 2 will likely prove the first of the two crunch moments of the GC battle.

However, on paper, the five-kilometre summit finish and ascent to Altea on stage 4 should provide a definitive verdict for the GC battle. Rearing up sharply from the Mediterranean coastline, its average gradient of over 11 per cent and ramps of 24 per cent make it one of the toughest summit finishes of the early season, particularly on a day with nearly 3,000 metres of vertical climbing in total.

One more unpredictable ingredient in Valencia's GC battle that can’t be forgotten is the wind, particularly as stage 3 runs entirely through the flatlands south of Alicante. The area was hit badly by recent flooding and storms and, in a show of solidarity, the route of stage 3 has been specifically designed to go through the numerous towns and villages that were affected.

Starting in Orihuela, the hometown of 1948 Vuelta a España winner Bernardo Ruiz, cycling's oldest surviving Grand Tour champion, and finishing in Torrevieja, the coastal town where the Vuelta a España began last August, the stage's extremely exposed terrain could see echelons forming if the wind gets up. For now, though, Valencia's first key reference point is Wednesday's ascent to Cullera - and how Valverde performs there.