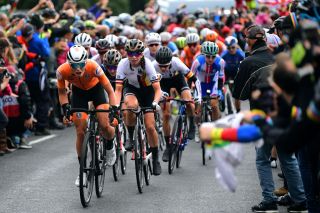 The UCI has secured the first level of professional gender equality certification as part of its strategy to introduce a related equality policy internally and to develop women’s cycling. The sport's governing body underwent an independent audit through FLOCert to certify it against the internationally renowned EDGE Certification standards in September and was awarded the level one Assess award on October 23.

"As the first woman Director General of the UCI, I am very proud that our Federation has obtained EDGE certification," said director general Amina Lanaya. "We are committed to an ambitious project to make the UCI an exemplary international sports body in terms of internal governance. In this context, the theme of gender equality is a priority, and we will continue to be committed to this goal in order to put in place, by 2021, a policy ensuring the well-being, equality and promotion of all our employees."

EDGE Certification is a globally recognised tool used to help close the gender gap inside organisations and companies. Its certification in professional gender equality offers three levels: Assess, Move and Lead. According to its website, the certifications levels are based on an independent audit review, which looks at objective and measurable evidence of a current status within an organisation; its established global standard of excellence; and its ability to create change based on transparency, accountability and recurring processes.

Pro cycling by numbers: conclusions from the last decade

The UCI chose the third-party FLOCert among the certification organisations suggested by EDGE. It was assessed in three areas: statistical data that included gender, age, origins, work flexibility, along with regulations and then a questionnaire sent to employees. The certification process measures the organisation's gender balance, insignificant unexplained gender pay gap showing equal pay for equivalent work, policies and practices that show equitable career flow for both men and women, and an inclusive culture.

The UCI is currently the only sports International Federation with the EDGE Certification Assess award. However, it's only able to stay at level one for six years before it must progress to level two: Move, or lose its status entirely. The UCI has stated that it aims to move up to the next level with in two years and has already begun that process.

To achieve the Move award, the UCI will implement an internal policy at the organisation that encompasses work flexibility, equal pay for men and women, prevention of all forms of harassment in the workplace, and promotion of diversity and integration.

"This certification is the latest in a suite of measures to ensure gender parity in our sport," said UCI president David Lappartient. "This is true at the level of our athletes, particularly with the introduction of a minimum wage from this season in women's professional road cycling and in the better protection of the riders, but also at management level within our governing bodies, where women need to be better represented in management positions."

Equality on the rise but there's still work to be done

Cyclingnews' Laura Weislo took an in-depth look at the UCI calendar, rankings and other stats to show what the state of road racing has been over the last decade. The data showed that the total number of UCI race days across all five categories: elite men, elite women, U23 men, and junior men and women, hadn't changed across ten years but were redistributed.

The data found that there were almost 1,500 days of UCI racing worldwide in both years but in 2010, the elite men's races took up 80.3% per cent of the entire calendar. By 2019, that was down to just under 73.2%, but it is still the massive mark above women's elite racing.

Women's elite racing was 8.2% of the total UCI race days at the start of the decade and grew to 15% by last year.

The data shows that there is still a long way to go to equality within the sport, and much work to be done to close the gaps.

The data found that within its own category, the elite women's race calendar has became stronger over the course of the decade. It gained one-day races, going from 34 UCI-sanctioned events to 90 over ten years. Stage races were up from 89 racing days in 2010 to 143 in 2019 – a 60.67% increase.

Although the data also showed that stage races are getting shorter overall for women, in terms of the number of days.

In November, however, the UCI came under fire after announcing the quotas number of athletes that each National Olympic Committee has qualified for road events during the Olympic Games in Tokyo, with spots for 130 men and 67 women.

This historic lack of parity in field sizes in road events at the Olympic Games had many questioning the UCI's commitment to equality in professional cycling. In response, the UCI has told Cyclingnews that it aims for total equality between men and women road cycling quotas by the 2024 Olympic Games in Paris.

Lappartient announced his commitment to gender equality through Agenda 2022, two years ago, which includes structural changes to develop gender equality in the organisation and the sport.

It promised to implement a Charter to promote gender equality, starting with in the UCI. There is a strict Code of Conduct that aims to raise awareness of harassment, and an updated and improved Code of Ethics.

"On the ethical front – a core area of the EDGE certification – we’ve already introduced significant changes to the UCI Code of Ethics in order to enhance the protection of athletes. Also note that we’ve raised awareness among members of UCI Women’s Teams, reminding them of the importance of ethical principles," a UCI spokesperson told Cyclingnews.

As part of the reforms, in the newly-implemented two-tier team system in women's cycling, top-tier WorldTour teams are required to pay riders a minimum salary. However, the minimum salary is not equal to the men's WorldTour minimum salary. It begins at €15,000 [employed] or €24,600 [self-employed] with a goal of equalling men's ProTeam minimum by 2023. The UCI standard contracts now include maternity leave and other social benefits.

The UCI is set to enforce 45 minutes of live television coverage for all Women's WorldTour events to improve visibility of the highest level of the sport.

In addition to these changes, the UCI says it plans to revise its Statutes, which will allow new requirements to be set for the minimum representation of each gender within the governing bodies of the UCI, Continental Confederations and National Federations.

"By the 2022 Agenda of UCI President David Lappartient and in line with the work of the International Olympic Committee (IOC), this [EDGE] certification reflects the commitment of the UCI to achieve the highest standards of governance of International Sports Federations by gender terms," a UCI spokesperson told Cyclingnews.

"According to ASOIF [Association of Summer Olympic International Federations], the UCI is one of the top five federations in terms of governance – and gender equality is a key element in this assessment."

The EDGE Certification is a step for the UCI in gaining recognition for its work toward achieving professional gender equality inside the organisation, which is commendable, but it doesn't necessarily translate to equality within the sport at an athlete level, yet.

Positive change often starts at the top and the UCI has told Cyclingnews that its steps toward gender equality internally will also have a direct impact on, national federations, athletes, events, and teams in future.

"Changes brought internally to the UCI aim at establishing good practice guidelines to cascade through the different tiers of cycling organisations across the world," a UCI spokesperson told Cyclingnews.

"The principle of gender equality, which guides our internal governance, reflects the priority given outside the Federation to the development of women's cycling at the athlete level: prize money, salary and working conditions, participation quotas, media coverage. This recognition is the latest in a series of steps to ensure gender parity in our sport."