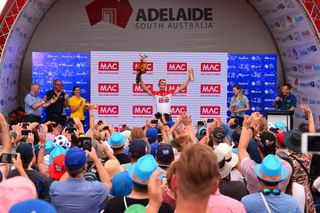 André Greipel celebrates winning the sixth and final stage of the Tour Down Under in 2018 – the last time that the German sprinter raced at the Australian stage race, which he's twice won overall (Image credit: Bettini Photo)

Two-time overall winner of the Tour Down Under, André Greipel, will return to the Australian stage race in 2020 with his new team, Israel Start-Up Nation, the race organisers have announced.

Greipel boasts 18 stage wins at the event – the first round of the UCI's season-long WorldTour competition – which will also this year welcome the likes of Romain Bardet (AG2R La Mondiale), Trek-Segafredo's Richie Porte, Elia Viviani of Cofidis, and Simon Yates and his Mitchelton-Scott teammate Daryl Impey, who's also the defending champion.

Greipel won both the opening stage and the final stage of the 2018 Tour Down Under in his final season with long-time team Lotto Soudal, ahead of a move to French team Arkéa-Samsic for 2019, which didn't prove too productive, with the 37-year-old German sprinter taking just one victory, on a stage of La Tropicale Amissa Bongo.

The Tour Down Under has evolved in recent years to better suit climbers and rouleurs – the last out-and-out sprinter to have won it was Greipel in 2010 – but the race serves as a popular warm-up event for riders of all types, providing something for everyone over six days of racing – or seven, if you include the prelude Down Under Classic criterium, two days before the start proper, which attracts large crowds to central Adelaide for a summer's evening of racing, and usually goes the way of the sprinters.

While Greipel will be well supported in his bid to add to his record stage-victory tally in 2020, his Israel Start-Up Nation team is also set to boast 2019 Tour of Utah champion Ben Hermans and the overall runner-up at the same event, Canadian climber James Piccoli – both of whom would be capable of taking the overall Tour Down Under title this year.