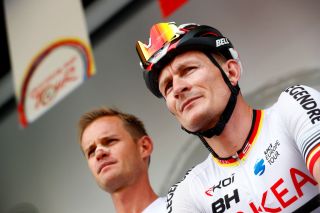 Israel Cycling Academy has announced the signing of veteran sprinter André Greipel for the 2020 season. The German was a free agent after terminating his Arkéa-Samsic contract at the start of October.

The signing is the latest big move for the ambitious Israeli team, which will be stepping up to the WorldTour next year after taking over the folding Katusha-Alpecin team. Dan Martin joined the team on a two-year deal back in August.

Greipel spent the past season at Arkéa after seven years with Lotto Soudal, but endured a tough time with the French team, with his only win in 2019 coming at Le Tropicale Amissa Bongo in January.

On October 1, Greipel revealed that he and the team had terminated his contract a year early, with a decision about his future to be announced after a holiday period.

"I am looking forward for the challenge to perform on my highest level again together with team ICA, a project for the future with lots of motivated and talented riders," said the 37-year-old in a team press release.

"I followed the team and saw its fast evolution in the last few years, and I wanted to be part of that, especially with the chance to go back and race in the WorldTour."

While Greipel's 2019 campaign did not turn out as he or his team had imagined, there's still hope that the German can add to his 156 professional victories, which include 22 Grand Tour stages.

"I am not somebody who is looking back. I just want to look to the future and start from there, and I know my abilities and will try my best to get back to that," Greipel said.

The team is hoping Greipel's wealth of pro experience will help them transition to the top tier during their first year as a WorldTour outfit, says team directeur sportif Kjell Carlström.

"André Greipel has such a vast palmarès from his years in the sport up to date that we are honoured to have him join the team," said ICA directeur sportif Kjell Carlström.

"We are convinced that he can continue to win with us in 2020, but most importantly, the vast experience he brings to the team in both classics and sprinters races is going to be hugely appreciated both for the other riders as well as management."

Greipel joins Martin as the big-name signings announced by the team so far. Rory Sutherland is accompanying Martin in the move from UAE Team Emirates, while the squad will also be bolstered by Hugo Hofstetter (Cofidis), James Piccoli (Elevate-KHS) and Patrick Schelling (Vorarlberg-Santic).

Retirees Rubén Plaza and Zak Dempster are on the team's outgoing list, as are August Jensen and Sondre Holst Enger, who both join Riwal Readynez.