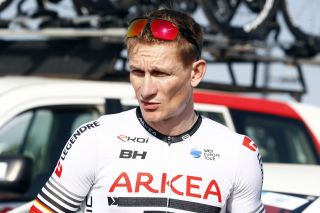 André Greipel and the Arkéa-Samsic team have confirmed they have terminated their contract for 2020, with the 37-year-old German sprinter avoiding talk of retirement and only saying he would make an announcement about his 2020 cycling season in November, after a family holiday.

Greipel will ride in Arkéa-Samsic's white and black colours for the last time at the one-day Sparkassen Münsterland Giro in Germany on Wednesday.

He joined the French Professional Continental team for the 2019 season after nine years with Lotto Soudal. He won a stage at the early-season La Tropicale Amissa Bongo race in Africa, but struggled to be competitive in the sprints during the rest of the 2019 season.

Greipel: This could be my last Tour de France

While announcing that he had terminated his contract with the team, Greipel also revealed that he had suffered with a bacterial disease for several months before the Tour de France .

"About four weeks ago, I asked the management of the team to terminate the contract towards the end of the year. Emmanuel Hubert and the team management have agreed to this request. I am very grateful for the cooperation we had in 2019," Greipel said via his personal website and on the Arkéa-Samsic team website.

"I would have liked to have extended the season statistics, but I was not optimally prepared for my season highlights. In the first half of the season I had to fight several months with a bacterial disease and once 100 per cent healed, unfortunately, this was only two weeks before the Tour de France.

"The Sparkassen Münsterland Giro on October 3 will be my last race in the 2019 season and also my last race for Team Arkéa-Samsic. Being at the start in Germany is always a special event for a German rider. Of course, we will prepare very well and work towards a top result in this final race. After this, I will start my recovery and a family vacation."

Greipel did not specify whether he'll continue to race in 2020 or talk about retirement, putting off any announcement until November.

"Until the beginning of November, I will leave my social media accounts silent and am not available for requests from the media. In the week of November 4-10 I will inform you about the 2020 cycling season."

He signed off with a thank you.

"Dear cycling friends, dear fans: I cannot thank you enough for your understanding and your ongoing support."

Greipel's palmares includes 156 victories, most of them in sprint finishes. He's won 11 stages at the Tour de France and seven at the Giro d'Italia. He's also won 18 stages at the Tour down Under and secured overall victory in the opening WorldTour race twice.

He turned professional in 2005 with Team Wiesenhof but quickly stepped up to WorldTour level with T-Mobile. He then emerged as one of the best sprinters in the world in 2008 while with Team Columbia.

Arkéa-Samsic team manager Emmanuel Hubert revealed that he didn't oppose Greipel's request to end his time at the team a year early. The squad plans to remain a Professional Continental team in 2020 in the hope of securing a wild-card invitation to the 2020 Tour de France and other major races. Warren Barguil will remain, while Nairo Quintana, his brother Dayer, Winner Anacona and Diego Rosa will all bolster the team's roster.

"I am obviously disappointed by André’s performances this season, even if I know he is the first affected. Our results together are far from satisfying," Hubert said.

"Getting out of the contract was an option, so we're not opposed to it. It doesn’t take away anything from his human qualities, which were greatly appreciated within the team, or from the experience he brought to the squad. Personally, I met a great champion and a good person. I wish him good luck in his future endeavours."